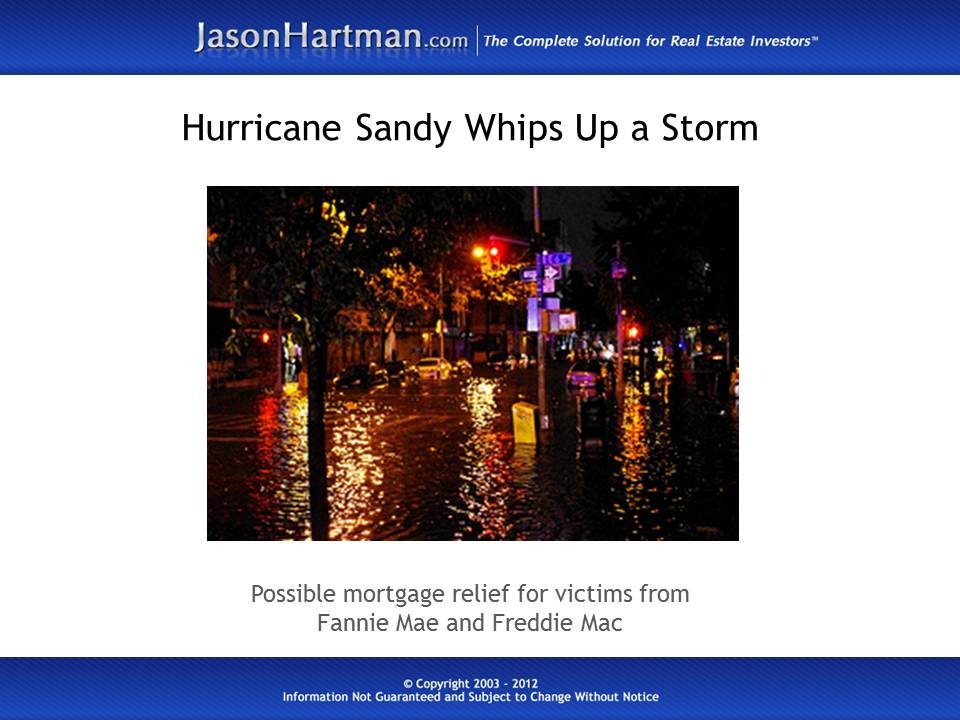 Hurricane Sandy, the superstorm that whipped the Eastern seaboard over the last weekend in October, destroyed thousands of homes in several states. As a way to help homeowners whose properties were damaged by the storm, mortgage giant Freddie Mac has offered to suspend or reduce payments owed on mortgages it owns for up to one year. This response, which may be followed by similar actions from other lenders, demonstrates why Jason Hartman recommends keeping income properties financed rather than paying hem off.

Freddie Mac, formally known as the Federal Home Loan Mortgage Association, is authorized by Congress to provide a secondary market for residential mortgages. Freddie Mac and its sister agency, Fannie Mae, (the Federal National Mortgage Association), which also trades in loans, together hold about half the mortgages in the United States, either directly or through secondary lenders. As of Fall 2012, that’s about 31 million loans. And along with a few other federal agencies, they backed nearly 90% of all new loans in 2012.

Because of the reach and scope of these two agencies, the decision to suspend loan payments to qualifying homeowners has immediate and far-reaching impact. What’s more, Freddie Mac has also asked its mortgage services to suspend foreclosure proceedings for at least a year on affected dwellings, which must be in a federally declared disaster area. Additional help includes not reporting delinquencies on loan payments to credit reporting agencies.

Fannie Mae has also stepped in to help, with a plan for mortgage services to help struggling homeowners by temporarily reducing or waiving mortgage payments for an unspecified length of time, allowing them time to recover and rebuild. The actions taken by these two superagencies echo the announcements of similar help offered to New Orleans homeowners in the wake of Hurricane Katrina, assistance not available to property owners who own the dwellings fee and clear.

This kind of assistance is offered to property owners regardless of their status, investor or homeowner. And along with landlord’s insurance that can cover a loss of income from the properties in the event of this kind of disaster, Freddie Mac’s suspension of mortgage payments on eligible applications means that income property investors who own single family and multiplex homes are protected from losses on the investment while rebuilding.

Home equity can be vulnerable. But as Jason Hartman says, a fixed rate mortgage that can be refinanced is an investor’s best friend, offering protection in the event of a major disaster and sparing an investor’s own money for other purposes. Working with Freddie Mac and his sister Fannie Mae, as well as their secondary mortgage services, investors can ensure that their properties are viable and capable of producing a return for the life of the investment, even when nature intervenes. (Top image: Flickr/ david_shankbone)