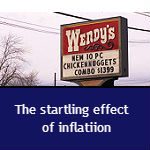 The stock market goes up and investors lose money. How is this possible? The reason is one that Jason Hartman has been talking about for years – that destroyer of wealth known as inflation. Jason is joined on episode #304 of The Creating Wealth Show by Sara, a long-time investment counselor with Platinum Properties Investor Network and expert on most things related to real estate. The discussion covers an array of topics and includes a lender discussion panel recorded at a recent Jason Hartman educational event.

Fragmentation of the real estate market is a term Jason applied to the modern day real estate environment. In particular it refers to the idea that property investors are no longer constrained by geography when it comes to choosing and buying investments. Take Jason for example. He owns properties that he has never laid eyes on in real life, some for many years. Thanks to communication technology like the Internet, cell phones, web video, etc., it is possible to virtually tour an investment property from four states away or the other side of the world.

The bottom line is that your physical location is less important than it used to be when it comes to investing in real estate. If you happen to live in southern California, and that market languishes in a down cycle, don’t buy a bad property and hope the market recovers just because it’s close!

Expand your search to markets that make financial sense no matter where in the United States they might be located.

A common lament from small (in funding, not stature) investors is that the large investment firms are impossible to beat. They swoop in at the last minute and pay above market prices, snaring all the good deals, right? Actually this is not the case, as Jason points out. While large investment firms do have what sometimes seems to be endless funding, it has been proven time and time again that they are unable to efficiently react to a fast changing market. Their preferred strategy is to buy large groups of houses in close proximity to one another. In your grandpa’s real estate market that might have worked. These days it might make more sense to buy multiple properties in just as many different cities.

The Little Investor’s OTHER Advantage

There is another good reason you should concentrate your efforts on real estate, even in the face of big investor competition. Jason puts it simply: property investing beats everything else, hands down. The stock market is a rigged game played successfully only by the huge investors like Warren Buffett and brokers who make their money churning client accounts. Precious metals? A little better but Jason accurately refers to it as a holding place only. Despite being at or near historic price highs, gold enjoys almost none of the advantages that accompany income property investing.

If you haven’t heard it before, TINA is an acronym for There Is No Alternative. News and business channels like CNN like to trumpet the stock market cause (perhaps because market-associated companies are the biggest advertisers?) as preferable to all the rest because there is no alternative. This is one of the biggest lies you’ll ever hear spoken with a straight face. There is a great alternative. It’s called real estate and millions of investors are earning billions of dollars in passive income from it every year.

Regular listeners to Jason’s Creating Wealth show podcast are likely already well-versed in the “inflation as wealth destroyer” mantra, but it cannot be said enough. Jason uses the inflation calculator and numbers pulled from ZeroHedge.com to make his point. Let’s say that the Dow Jones Industrial Average sits at 14,165 on July 1, 2007. Let’s further say that it reads the same 14,165 one year later.

It’s a wash, right? You didn’t make any money but you didn’t lose any either. Wrong! Wrong! A thousand times wrong! Consider the following theoretical price changes that occurred during the year in question:

The preceding numbers are a clear reflection of the effects of inflation during the year. The Inflation Calculator adjusts for inflation (sort of, but not nearly enough to reflect the real rate of inflation) and tells us that the stock market would have to have climbed to 15,631 in order to break even.

Why? Remember that inflation erodes wealth through a steadily devaluing of currency. It’s like a hidden tax! There is no such thing as staying in place. You have to move forward just to stay even.

Most investors are familiar with the idea that there is a limit to how many Fannie Mae loans you can get, and that number is generally thought to be 10 (with a few exceptions). To the average person with one or maybe two mortgages the idea of ever needing 10 mortgages is ludicrous. However, a serious income property investor can run out of funding sources quickly.

That’s why it’s important to understand loan sequencing in order to get the biggest bang for your buck from this federally-backed lender. A smart property investor will plan ahead and mortgage the four most expensive properties he or she plans to buy first. Properties five through ten will incur a leverage loss of about five percent with each mortgage, meaning you will be down a total of 25 percent by the time you hit the last loan.

The idea to keep in mind is that investment property loan terms are much less favorable than primary residence loans, so it behooves the investor to completely understand the mortgage process and trust the lender you choose to work with. (Image: Flickr | Sister72)

Why Rich Russians Invest in the U.S.