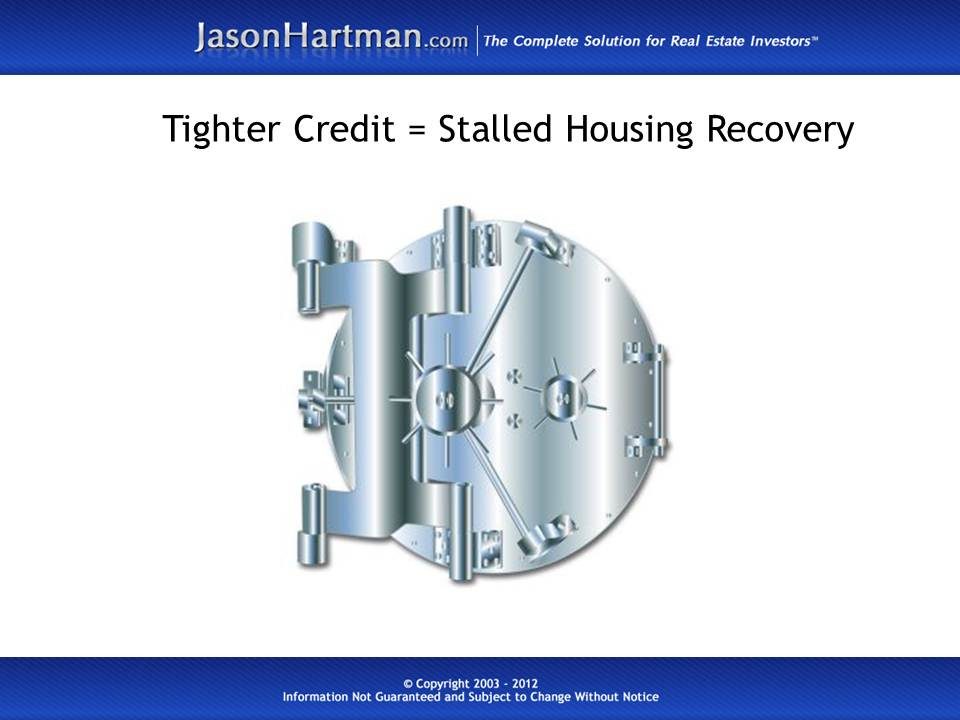 Scattered signs of a housing recovery are beginning to show themselves across the fruited plain still shell-shocked by the worst economic crisis since the Great Depression. Housing starts in October showed the most encouraging signs of life since 2008 with a 3.6 percent increase. Even Super Storm Sandy, which slammed into the East Coast late last month, didn’t dampen the timid enthusiasm.

This was the second piece of good news for housing – sales of existing homes increased by 2.1 percent in October also – and it’s now safe to say that prices are rising in most regions of the country. Construction is up. Prices are up. But the engine is still sputtering. What seems to be the problem? Why isn’t momentum building for house purchases faster than it is? Actually, as Jason Hartman has been pointing out, we do see a fairly healthy pickup in one segment of the market; all-cash buyers scoping investment properties make up about 30 percent of houses sold, which is about double the level you want to see in a healthy housing market, according to the National Association of Realtors.

The reality of today’s lending environment is that banks are soil-their-drawers afraid of getting sucked back into the same cycle of easy approval that started the whole fiasco in the first place. A potential homebuyer looking for a loan will quickly notice changes in the down payment. Gone are the days of 5 percent down. Most of today’s lenders require 20 percent of the purchase price up front in cash before they’ll even think of approving a loan.

Which brings us to the second aspect of increased credit scrutiny. Remember (not so long ago) when adequate income and legitimate credit scores didn’t matter? To put it bluntly, now they do. If you don’t have at least a 720 FICO score there’s a real good chance you’re not going to get a loan. In the years leading up to the housing bust prime lenders were happy with 680, and subprime lenders didn’t really care what your score was.

Now Federal Reserve Chairman Ben Bernanke has gone public with his opinion that lenders are exhibiting a bit too much paranoia, so much that it is actually impeding a housing recovery from progressing to the next stage. Maybe they are and maybe they aren’t. Or maybe it’s a natural result of being forced in the past by giddy federal agencies to loan as much money as possible to people with no hope of ever paying the loan off.

The reality on the ground right now is not good for previously creditworthy homebuyers who come looking for a mortgage loan and find instead a locked vault. (Top image: Flickr | RambergMediaImages)