Here’s how inflation destroyed this once prosperous country

America is a lucky country.

If you live in the US, you’re part of the globally privileged.

The select 300+ million who have the luxury of living in the most prosperous society on this rock.

The US’s wealth and economic opportunities are second to none.

Migrants all the way from economic dumpster fires like Venezuela to war-torn parts of the Middle East go to great lengths to migrate to the US.

A testament to the country’s vast wealth and opportunities available to those who capitalize on them.

Here’s the thing, perpetual prosperity is not a guarantee.

History has repeatedly shown that wealthy societies can spiral into a vicious cycle of decay, which can later culminate into permanent decline.

Even for the most politically and economically stable countries in the present, a prosperous country is one demagogue away from falling into basket case status.

People forget that Argentina was one of the most prosperous countries at the start of the 20th century.

It’s no surprise why millions of migrants from France, Germany, and Italy migrated to Argentina during 1880 to 1930.

At that juncture, Argentina was USA 2.0 for many European migrants, a land of opportunity that offered a way out for those who found life miserable in the Old World.

Previous decades of robust growth came to a grinding halt during the 1930s, which created massive unrest in Argentina.

Many Argentines grew angry with the current political class at the time and started looking for an alternative political option.

And that soon came in the form of General Juan Domingo Perón. 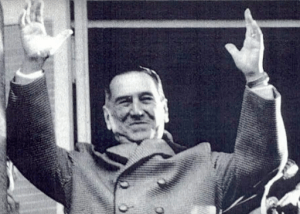 Perón was an interesting character to say the least.

Inspired by Benito Mussolini’s Italy, Perón sought to create a populist economic system that worked to advance the interests of the working class.

Although the system Perón ushered in was not socialist per se, his “third way” corporatist policies were still quite interventionist in nature.

Most notably, the country’s central bank was nationalized under Perón’s watch, which had enormous repercussions for Argentina in the decades to come.

Perón was deposed in a coup in 1955, but his legacy lived on through other parties that appealed to his legacy and doubled down on the interventionist policies.

This was most notable on the central banking front where subsequent Argentine governments naturally turned to the printing presses to finance their big spending programs.

Like all government meddling in the economy, the chickens eventually came to roost by the late 1980s when hyperinflation entered the picture.

At one point, the inflation rate reached 12,000% in Argentina.

Although the country moved to a currency board to stave off hyperinflation in the 90s, inflation was always lurking in the background.

For example, when using 2018 as a year of reference, a 23-year old Argentine spent 65% of their life under double-digit inflation.

Furthermore, any Argentine born in the early 1980s witnessed two explosive cases of hyperinflation in 1985 and 1989.

Fast forward to 2021, inflation is projected to reach 46% according to a Reuters report.

All told, inflation is part and parcel of Argentina’s economic experience,

It’s a small wonder why Argentina is so economically volatile.

Inflation is a wealth killer, as it destroys people’s savings while making life easier for the bankers and corporate titans who have the luxury of receiving freshly printed money first.

On the other hand, the working classes receive a devalued currency that loses its value every year.

Prosperity can be fleeting and individuals can only have so much impact on politics.

For some nations, political dysfunction is baked into the cake and political activism to change the political status quo is a fool’s errand.

The US is in uncharted waters now with a senile administration that is suffering a legitimacy crisis.

On top of that, there’s an insurgent radical wing in the Democrat Party, better known as the Squad that’s gaining traction by the day.

The jury is out on what the US will look like in ten decades, but one thing is indisputable:

You cannot rely on the political winds to build your wealth.

It’s incumbent upon you to start laying the groundwork for your financial security, regardless of who’s in public office.

And the best way to do so is through real estate investing.

Let’s get one thing straight. The home is at the center of the universe.

Income property is the most historically proven asset class in the entire world.

Every human has three basic needs: food, income, and shelter.

Of those three, people will still need housing irrespective of the political and economic context.

And you can exploit that need to your advantage.

Here’s one thing that your typical financial guru won’t tell you….

There is no longer a taboo about renting houses.

This is due to demographic changes and a shift in cultural preferences that has led to more people renting houses than in years prior.

And you, the empowered investor, can take advantage of this new trend.

You see, the name of the game is generating cash flow.

By taking out a loan to acquire a property and then renting it out to a tenant, or even multiple tenants, you’ll be able to create new cash flows.

And, oh yeah, remember the previous talk about inflation?

It’s absolutely terrible for lenders and those who hold lots of cash, but for debtors….

In essence, you use cash flows (tenants paying you rent) to pay back the debt in cheaper dollars.

This is the hidden wealth creator in real estate investing.

With that said, you might have hesitancy about getting into the housing sector.

You probably think that housing is too expensive…

But as I’ve said on my podcast show, housing is expensive compared to what?

Let’s compare housing prices to gold, which has been used as money for five millenia.

The median home price in gold has actually gone down since 2000 as I demonstrate in the graphic below. 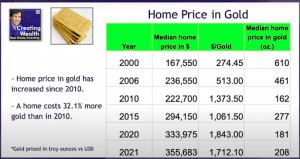 Sure the nominal price of housing has increased when it comes to devaluing fiat currency like the dollar, but everything is contextual.

Moreover, there’s no national housing market. In fact, the US has multiple housing markets of distinct housing quality, price ranges, and amenities for people of all backgrounds.

Knowing where to scope out the ideal places to acquire properties is crucial during your journey in the real estate game.

There’s plenty of gurus out here who say you need to go to the big urban markets to strike it rich.

To be blunt, these folks are wrong.

You’ll get the most bang for your buck in linear markets in lesser-known cities nationwide.

This is what I teach at the Empowered Investor community.

At the Empowered Investor, I’m here to guide you on the path to real estate success and show you where the best linear markets are nationwide.

This is the place where you will receive real advice that I can’t say on my regular podcast show.

The Empower Investor community will allow you to have access to a network of entrepreneurs and investors who will put you on the fast track to real estate investment success.

At the Empowered Investor, you will get the chance to hear from my most successful clients.

You will get a behind-the-scenes look at how they manage their properties.

The Empowered Investor is not just some random forum.

It is for those of us who want to learn from the best minds in the real estate game.

It is for those of us who care enough about our investments to keep learning and growing as a real investor.

It is for those of us who desire a straightforward, no BS path to financial independence.

Don’t get caught up with the madness of everyday politics, and start focusing on more productive activities that will make a difference in your everyday financial affairs.

So make haste my friend, and join me and other Empowered Investors for the highest return on life at the link below: