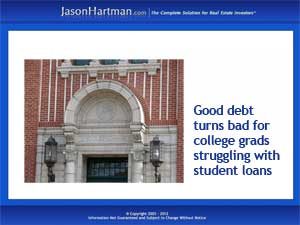 In a previous post, we took a look at why new and recent college graduates saddled with student loans are wary of taking on the traditional debts of adult life: car loans and mortgages. Now, a closer look at the financial habits of the people known as “Generation Y” point sup the differences between what’s considered “good” and “bad” debt to have – with implications for the stability of many areas of the economy, including housing

Good debt, as Jason Hartman says, is asset building, which is why a mortgage can be very good debt indeed, offering opportunities to build wealth and reserve savings for other important aspects of life. Some financial experts also place student loans into the category of good debt, since in theory it supports an individual’s potential for achieving greater income and financial success. But economic downturns and a sluggish job market alters that equation, leaving large numbers of recent graduates trapped in low-paying jobs or continuing their education in graduate school.

New data on university graduation rates reveal that in 2011, over half of those under 25 who finished college with a bachelor’s degree were unemployed – and numerous others who had jobs were considered “underemployed” – working at a fast food outlet rather than in their degree area, for example. For these graduates, although the loans they assumed in college were intended to support a career path with higher earning power, repaying loans becomes nearly impossible. Many simply give up, causing today’s record number of student loan defaults.

If student loan debt – a good debt gone bad – weren’t enough, nearly 40 percent of Generation Y’s debt load comes from credit cards and other loans that don’t build assets – the true bad debt that financial gurus warn against. That comes from living off credit cards while in school and, according to some studies, a tendency toward impulse buying made easier by the technology of point and click purchasing.

Housing industry observers fear that this generation’s burden of debts, bad and less bad, could create a bubble that crashes on the emerging housing recovery. As older homeowners downsize and put houses on the market, there may not be a generation following that’s capable of stepping up to buy them. The rental market may take a hit, too, as these young unemployed graduates opt to stay at home or with friends rather than strike out on their own. For them, and for the housing market overall, the Gen Y debt trap is a bad one to have.  (Top image: Flickr/jjorogon)