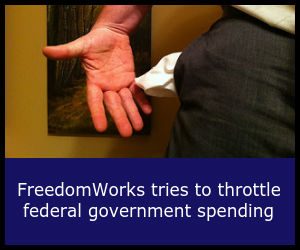 Freedomworks, a grassroots organization, has a problem with the centralization of power in the federal government that has taken place in the United States over the past century. Dean Clancy, Vice President of Public Policy for Freedomworks, joins Jason Hartman on episode #311 of The Creating Wealth Show to discuss a variety of hot button issues, including the spate of recent fiscal cliff and sequester spending disasters.

Before welcoming Mr. Clancy to the show, Jason spoke with Michael, an investment counselor, about several issues, perhaps none more urgent than his recent retirement announcement. For those who might not have listened to the previous episode, Jason claimed he would be retiring from all of his business pursuits over the next two months. Those who know his Energizer Bunny style of work, were suspicious of the veracity of the claim from the beginning. Even more suspect was the timing of the announcement: April 1st. April Fool’s Day.

If you believed Jason, gotcha! It was just his April Fool’s joke.

Michael brought up the recent bankruptcy filing by the city of Stockton, California. At that time (July, 2012) it was the largest city (pop. about 300,000) to file for protection from creditors. City attorneys cited several failed large scale projects and the real estate collapse as contributing factors. Since then, the much larger city of Detroit has chosen the same way out of financial obligations, but Stockton was a pretty big deal when it happened.

While Americans are not used to the idea of entire cities filing for bankruptcy protection, Jason says we should get used to it. In fact, he theorizes that California might find itself to be the first state to go that route.

Bad Credit? No Problem! You Can Buy a House

At the time this episode aired, mid-2012, we were just starting to lift our national heads up from the foreclosure crisis that began unraveling in 2007. Both Jason and Michael found it ludicrous that President Obama’s administration had already begun pushing banks to make loans to people with bad credit again. Already.

The thinking (and we use the word loosely), is that it was unfair to people with lesser credit to be left out of the recovery. This is, once again, the kind of political pandering that put us into the crisis in the first place. Of course, the federal government, with its red hot printing press cranking out more currency around the clock, will back the banks in these soon-to-be horrible loans. Never fear, though. The banks won’t be at risk when the you-know-what hits the fan. The ultimate scapegoat will be taxpayers and bondholders, because this whole mess is going to go SPLAT, like it always does. Jason’s assessment is that we are at the beginning of the next housing bubble.

Though the FreedomWorks organization leaves a fingerprint on a variety of social and economic issues, the basic idea is that our nation needs less government intrusion into our lives and a lighter tax burden. Dean Clancy describes FreedomWorks as a national grassroots effort, powered by more than two million people, to weaken the ever-increasing grip the federal government retains on the populace.

Much of the work is done at the state level, with the hopes that electing good people will have a trickle up effect on the national decisionmakers in Washington D.C.

Stepping Off the Fiscal Cliff

What is the fiscal cliff? We hear the term bandied about in the media and on talk radio, but what is it really? To understand that, let’s return to those thrilling days of yesteryear and the Budget Control Act of 2011 (BCA). In order to not leap off a fiscal cliff THAT year, legislators essentially kicked the can down the road, setting a date one year in the future when a slew of “draconian” financial measures would kick in.

Of course, one person’s draconian is another’s common sense. Essentially, there were a variety of automatic budgetary cuts due to kick in at midnight on December 31, 2012, cuts that were intended to begin hacking away at the $16 trillion dollar debt sitting on the federal books. Of course, individual agency and program administrators sailed into a frothing mouthed frenzy at the idea they would have less money than expected. They began chewing on the ear of their nearest senator or representative. A deal must be reached to avoid the fiscal cliff at all costs!

According to Clancy, all this posturing and crisis-mongering was manufactured all down the line. Parts of the bill, tax increases in particular, we’ve known about for 12 years. For an entire year prior to the fiscal cliff, the prospect of sequestration (automatic, across-the-board spending cuts) was well known.

Clancy reveals that the media maelstrom surrounding the pending economic doomsday was nothing more than a planned opportunity for well-heeled lobbyists and agency heads to cram a “wish list” of spending through the Senate Finance Committee. The bottom line is that a fiscal cliff is always an intentional, planned event to create a crisis so government can rush in and solve it.

…And the Costly Solution

The solution to the crisis predictably relies on tax increases. Clancy reminds us that the Harry Reid U.S. Senate did not pass a constitutionally mandated budget for three straight years, which has led us to the $16 trillion dollar debt we’re mired in and the reality of borrowing .40 cents of every dollar we spend.

The Freedomworks refrain to solve the problem is predictable and sound. Don’t raise the debt ceiling again until there is a budget in place. Cut federal government spending. Don’t let that wacky Uncle Sam near the credit cards until he shows he can responsibly stick to a budget.

Jason points out there there is no incentive to do the right thing in Washington, which Clancy agrees is the reality. The founding fathers’ idea of checks and balances seem like an antiquated notion from the past now. Clancy offers an out-of-the-box approach that would require the federal government receive approval from the states on its spending.

What Can You Do to Help?

Take the Mystery Out of Rehabbing Properties