Foreclosed Homes: The Next Zombie Apocalypse? 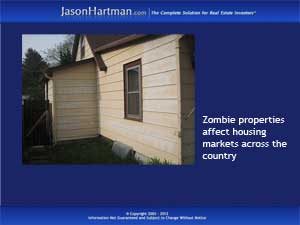 Everyone knows about the shadow inventory of foreclosed houses. But how about the zombie inventory? That’s the term coined by a January 2013 Reuters report on homes abandoned by their owners after receiving a notice of foreclosure from their bank. But here’s the catch: in these cases the banks never follow through on the foreclosure, leaving properties in limbo, owners still liable, and communities forced to deal with the aftermath.

In the turmoil of the housing collapse of 2008, mortgages holders fell into default in droves across the country. Mortgage lenders instituted massive numbers of foreclosure proceedings. Some homeowners attempted short sales, others lost the property to foreclosure, and some simply walked away from the whole thing – the “strategic defaulters’ who stopped paying on the mortgage knowing that it would probably take years to complete a foreclosure anyway.

At the same time, banks and other lenders rushed foreclosure paperwork through the system, processing cases wholesale with no oversight and a lot of fraud, leading o the so-called ‘robosigning” scandal and subsequent legal actions. And so, because of negligence, outright mishandling of foreclosures, or simply being overwhelmed by a backlog of cases, the banks and other lenders dropped the ball. Unlike properties trapped in the massive backlog of foreclosure cases taking years to creep through the system, foreclosure proceedings on zombie properties were never started, leaving them in limbo.

That means that owners who walked away assuming that the bank had seized the property for a foreclosure sale are still accountable for all property taxes, municipal fees and other bill related to the house. And since neither they nor the banks are assuming responsibility for the upkeep and maintenance of the property, those homes are falling into severe disrepair, creating eyesores in the community and havens for criminal activity.

Since the property sits vacant, municipal agencies often must deal with the problems of crime and neighborhood blight caused by these abandoned properties. Meanwhile, absentee owners find themselves targeted by debt collectors, or their credit damaged due to nonpayment of bills they didn’t think they still had to pay. Some may end up threatened with fines or jail time for failure to keep properties they didn’t think they owned up to code.

Zombies are more prevalent in some areas of the country than others. In Kentucky, Washington, Indiana and a few other states, zombie properties account for over half t he total foreclosure inventory. And the rates could be higher depending on the criteria used.

The presence of zombie properties can drive down property values and home prices in their neighborhoods. But, these properties can be purchased for rock bottom prices from owners desperate to sell – although they may come with a hefty cost in time and money needed to repair the damage from neglect. For investors following Jason Hartman’s investing guidelines, the presence of the zombie inventory can change the landscape of housing markets nationwide.  (Top image: Flickr/PaperCat)