For Successful Investing, Get an Early Start 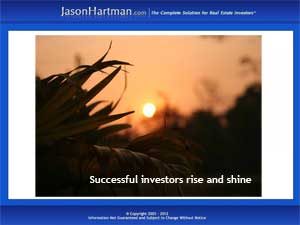 Do early risers have more investing success than slugabeds who sleep the morning away? Profile after profile of successful people in all walks of life show that, whatever else they do, these achievers share one key trait: they start their day early.

A new report ties early rising to success in all kinds of investing endeavors. While that may not be universally true, research on productivity and achievement suggests that those who get up early have a clearer vision of their goals than those who sleep later, and they’re more able to formulate the plans that help them make those goals a reality.

The finance site Money Morning reports on new research by University of Heidelberg professor Christoph Randler that suggests that these early birds make better investing decisions and enjoy greater financial success overall than those who hit the snooze alarm.

What do these successful people do in the morning?

They use the time to get focused, find clarity and plan their activities for the day. The majority of the successful people surveyed in productivity research did one or more of these things:

Whether it’s running, tai chi, yoga or an hour in the gym, most successful entrepreneurs and investors commit some early morning time to working out. The benefits? Overall better health, increased oxygen flow to the brain, and an increased sense of well-being and energy that helps with making decisions, thinking fast and resolving problems.

Or something similar. If there’s one thing shared by nearly all highly successful people studied, it was a commitment to a daily meditation and/or mindfulness practice. Whether it’s ten minutes or the hour spent by really dedicated practitioners, a meditative practice of some kind appears to give these high achievers a mental clarity and “edge” that carries them through the day.

Good decisions don’t just happen. And successful people use their morning time to strategize for the coming day. That could be as simple as making up a To Do list, or as complex as keeping a journal to explore thoughts and create new strategies to make goals a reality.

Creative visualization may seem too New Age for many, but advocates of visualizing and its cousin, affirmations, say that helping the subconscious mind to “see” outcomes does much to eliminate resistance, align yourself with a picture of success and get the conscious and subconscious minds on the same page.

Successful investors and others know they can’t accomplish everything. So an important part of that early morning planning involves taking a clear look at what needs to be done and whittling away at the non-essentials.

Oh, and these overachievers make time for breakfast, too. Like Mom always said, it’s an important meal, fueling the brain with the energy it needs to stay on top of the day’s activities.

Not everyone is a morning person, and there’s no one approach that guarantees success. But for investors hoping to build wealth the way Jason Hartman recommends, setting the alarm clock may be a simple way to change the game.  (Top image:Flickr/DigatiTalukdar)

Fitz-Gerald, Keith. “Successful Investing: Five Things to Do Before 7 AM Every Day.” Money Morning. MoneyMorning.com. 18 Nov 2013

It’s Time To Learn About the Self-Directed IRA