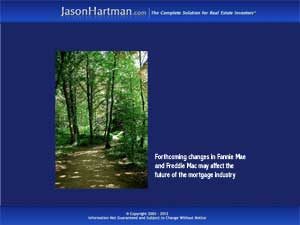 They’re such a part pf the housing industry landscape that everyone knows their nicknames better than the official titles they stand for: Fannie Mae and Freddie Mac. Combined owners of over half the mortgages in the US, the Federal National Mortgage Association and the Federal Home Loan Mortgage Corporation have offered ways for the government to prop up the struggling housing market. Now, major changes in these venerable companies mark a shift in the government’s involvement in mortgage financing.

Fannie Mae and Freddie Mac have been around a while. Created in 1938 as part of the New Deal following the Depression, Fannie Mae was intended to help more Americans buy homes at low interest rates – rates that could be offered because these loans were backed by the US government on foreign investments, creating a secondary mortgage market that continues today. Fannie Mae went public in 1968 taking on a new life as a mortgage financing entity. Soon after, Freddie Mac appeared, created in 1970 as another alternative in mortgage lending.

The fate of these two entities has been closely intertwined with the housing collapse of 2008 and after, as well as the recovery that followed. The only two Fortune 500 companies that are not required to inform the public about financial difficulties, both Fannie and Freddie were found responsible for accounting errors totaling nearly 5 billion dollars prior to the housing meltdown. And afterward, in 2012 Freddie Mac was investigated (and cleared) on charges that it manipulated policies to keep homeowners stuck in its higher interest loans in order to boost profits from some of its investments.

Troubled as these lending giants may be, the government has used them to boost the housing recovery by buying up mortgage backed securities to keep interest rates low and selling off bulk lots of foreclosed homes they held. Now, though, as the housing market continues to improve and the mortgage lending industry has cleaned up many of the fraudulent practices that marked the period surrounding the housing collapse, the government is attempting to reduce its involvement in mortgage financing.

In light of long term plans by the Obama Administration to dissolve Freddie and Fannie entirely, Edward deMarco, acting director of the Federal Housing Finance Agency and overseer of both these entities, has announced a strategy to combine certain divisions of both agencies into a third entity that would manage mortgage securities. With its own CEO and board acting independently of the parent companies, this new entity could lay the foundation for a completely revamped mortgage market.

The move comes as part of a renewed effort to fix the mortgage industry – a complicated and often dysfunctional industry that relies on private lenders, government backers and the movement of foreign funds – creating problems that trickle down to struggling homeowners and buyers of investment and residential property cross the country.

Fannie and Freddie’s proposed makeover has the potential to affect the housing market on many levels, with the potential for changing lending structures and standards for home buyers and investors working with Jason Hartman’s principles for investing in income property.  (Top Image: Flickr/St_A_Sh)