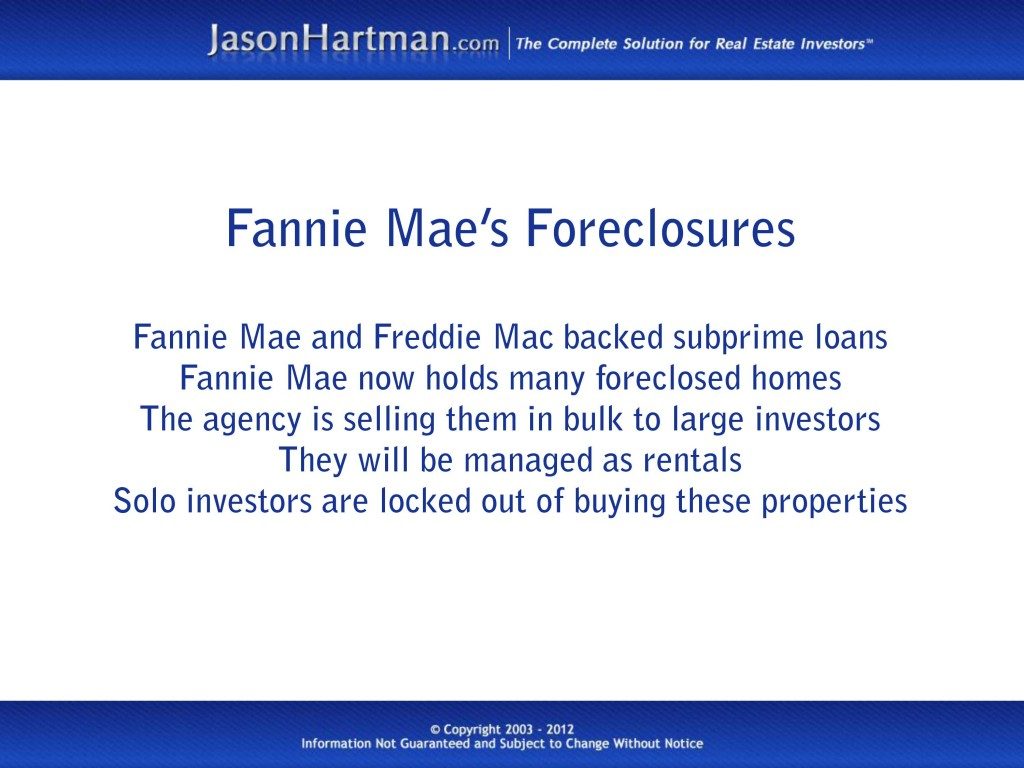 Federal mortgage entities Freddie Mac and Fannie Mae played a major role in the housing collapse of 2008-2011, supporting a large number of the subprime loans that crashed, pushing massive numbers of homes into foreclosure. Now, Fannie Mae continues to play a major role in the housing market with its plan for bulk sales of its foreclosed homes to large investment companies. For solo investors following Jason Hartman’s recommendations for income property investments, this means fewer houses available for purchase as well as a smaller pool of potential tenants.

By the end of 2008, as the subprime loan market was collapsing, Freddie Mac and Fannie Mae stepped in to guarantee even more sub prime mortgages in an effort to reassure the housing market. As the collapse continued, the government had to put at least $150 billion into keeping these agencies afloat, and the Federal Housing Finance Agency eventually put both of them into a temporary conservatorship.

As of 2012 that conservatorship still holds. The housing market has improved, but not enough in some key ways to allow the government out of this arrangement. The result? Although news about the housing collapse has faded from the headlines and statistics show that housing construction and sales are on the upswing, the backlog of foreclosures begun during the crisis is only now clearing the courts.

That new wave of foreclosures can mean good news for property investors looking to buy inexpensive priorities. But now, Fannie Mae announces not one but two bulk sales of its foreclosed homes not to individual purchasers but to large investment companies, locking the solo investor out of the opportunity to participate in the sale of these properties.

These properties – all 2,000 of them — are nearly all single-family homes, being sold to investment companies in Florida and California to firms that have committed to rent them for a minimum of three years. These firms claim that their strategy is to benefit the distressed neighborhoods where most of these homes are located, and that some of these properties may go back on the market for general purchase sometime in the future.

Some worry that the overload of rentals could hurt neighborhoods and by taking these homes out of the reach of potential buyers, a permanent rental class might be created. Other real estate experts point out that markets are always in flux, though, and what’s true now may not be so tomorrow.

For those investors who are following Jason Hartman’s recommendations to buy single family homes on a long term fixed rate mortgage, Fannie Mae’s move may or may not have a significant impact, depending on the market. But the Fed’s decision underscores the importance of acting quickly – and prudently – to secure the investment properties you want while they’re available.