In this episode of the Creating Wealth podcast, Jason Hartman discussed the issues with cryptocurrencies, like Bitcoin and their creation. He cataloged the impact that these currencies have on the economy and the environment and noted that a tulip price bubble was likely underway.

Hartman has updated the Meet the Masters event, and new speakers and guests are going to be in attendance. The event now has enough material and speakers to fill three days rather than two, and ticket upgrades will be available shortly.

Mark Sanborn, former president of the National Speakers Association and author of The Fred Factor discussed his book’s success and introduced his newest book, The Potential Principle.  Sanborn offers his advice and his outlook on opportunities for personal success.

A Tulip Price Bubble in Cryptocurrencies?

Hartman begins his segment on cryptocurrency by explaining how these currencies work in comparison to the more well-known currencies. The reason that something has value is due to a combination of its scarcity and its utility. For example, silver is valuable because it is scarce and because it has utility. Stones and precious metals are mined from the ground with quite a bit of equipment, making it expensive to mine. These metals and stones have value because they’re hard to find without this equipment. It’s a driver of their value.

The cryptocurrency Bitcoin must also be mined, but instead of using expensive equipment to dig these coins out of the ground, mathematical equations are performed to essentially mine Bitcoin out of cyberspace. Computers execute very complicated equations and use a lot of energy to mine Bitcoin and the more coin developed from this method, the more complex the mathematical equations get.

In relation to this topic, Hartman cites an economist who talked about the concept of fake work, comparing fake work to the fake news that we are all accustomed to today.

“The truth is hard to come by in today’s world.” Hartman says.

George Orwell talked about the “streamlined person” in the 1980s, making a composite of a person with no real depth, no real drive to think for himself, and an overwhelmingly gullible way of looking at the information around him.

Hartman cites this type of streamlined person to explain that a lazy brain, the lack of desire to think, is in our nature as human beings. The brain truly takes a good deal of energy to power and often, it would rather do nothing than use that energy. It’s easier to be lazy, and we see the result of this all over today’s world with people not wanting to think. They’d rather be spoon-fed information than attaining it for themselves with any sort of work.

The production of Bitcoin is comparable to fake work. Fake work (the mining) to produce something fake (the Bitcoin). Hartman believes that the currency is coming into a tulip price bubble that’s doomed to crash horrendously. 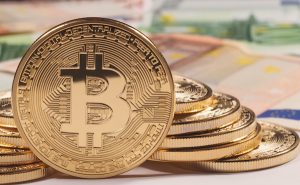 It now takes one week’s worth of energy to mine one Bitcoin, that’s the average usage of energy to power a single home for a week for a single coin. It’s becoming a fiat currency, like other cryptocurrencies, because of the belief in its value. It’s a belief system brought about by people that are deeply into the idea of this currency. It’s fake currency ultimately, produced by “fake work” that creates real environmental damage.  Much like war, Bitcoin causes more damage than it brings benefit.

There will also be local market specialists available, mortgage professionals, tax advice, and legal advice. It all takes place on a January weekend in La Jolla, California.

Attendees with elite access tickets can enjoy the VIP dinner with Ron Paul, green room access, and photo opportunities with each of the speakers. For more information, visit jasonhartman.com/masters.

What is The Potential Principle?

Hartman introduces this episode’s guest tuning in from Denver, Colorado, Mark Sanborn, former president of the National Speakers Association and New York Times best-selling author of The Fred Factor. He also has a new book available, entitled The Potential Principle.

When asked about The Potential Principle, Sanborn answers that,

Sanborn explains that in his experience, in working with many successful people, no one has been able to truly prove that he or she is at their best potential. We assume that our lives are going to be better every day, but very few people do the necessary things to ensure that this is going to happen. The book is about constant improvement, getting better no matter how good we already are.

Hartman notes that one of his mentors, Dennis Wheatley used to talk about the concept of permanent potential, meaning that people have virtually limitless potential, but they constantly fail to tap into it.

Sanborn agrees, some people claim to be happy with their lives as is, but most would love to better themselves in some way. In his research, 57% of people interviewed wanted to improve their lives, but only 36% had a plan to do so. There’s a difference between awareness of a desire, and action toward that desire.

The Potential Principle applies to everything in life. In his book, Sanborn asks the question, “Better at what?” The Potential Principle can be applied to any aspect of human life, and Sanborn advises listeners to reserve their best efforts to what really matters. If you’re at your personal best in one area, you might consider improving yourself at some other part of your life.

Preferring one of these quadrants is completely normal, but we need to develop sectors of both worlds.

“There’s great benefit into improving in each of those four areas, becoming a better thinker, using learning to improve our performance, then reflecting on what we do so that we get insights on how we can do it better.” Sanborn explains.

The Potential Matrix is a good visual reminder of our daily plan to prepare ourselves or gain an advantage to improve in each of these four quadrants.

One technique Sanborn cites for improvement is the concept of knowing and understanding how to disrupt yourself before an outside force does.

“That’s talked a lot about in the business world, being willing to cannibalize your own business. That takes a lot of guts.” Hartman agrees.

As people become successful, there’s a potential danger in simply continuing to do what has made them successful. It becomes a problem when that technique no longer works because it’s no longer relevant. Rather than turning up the volume, we need to change things. Look for practices in your business that need disrupting. Rather than waiting until the need arises to let a non-performer go, tell this person what he or she needs to do to become an asset.

The most dangerous moment comes with victory. We are confident when we succeed, and it can become a problem. There is always room to improve. A true leader knows that there has to be a better way.

Another technique that Sanborn introduces in The Potential Principle is putting effort into engaging others. Think who before you think how. We can’t do everything alone and it isn’t a benefit to try accomplishing everything on our own. Sometimes, someone else knows how to solve a problem better than we do. When there’s a need, think about who you need to seek out to point you in the right direction.

Sanborn mentions the help of his friends when he’s in need of direction. He and his friends shared the joy of bourbon and food and they were able to surpass that hobby and build a business together.

Selecting a Book to Read

Sanborn mentions reaching out to a network when he’s selecting a book to read. Not only does he look at a book’s reviews, he knows people on the same wavelength as himself and asks the people he knows for their advice. Going through their recommendations, he checks the book’s reviews.

The Importance of the Five Friends

Sanborn also points out that nobody can prevent a person from being extraordinary. Often the biggest jumps come from the biggest obstacles. He advises listeners not to let their circumstances determine their course of life.

The five friends are an important part of building oneself up. In a group, the important parts that make it work are clarity of purpose in how to help each other, and a basic shared value system, Sanborn says. It’s important to have people you can trust enough to tell you the truth.

Sanborn and his friends tell each other how they perceive actions, rather than saying what they think others will like hearing. They have an agreement to call one another out on actions that are not in their best interest. They care about one another and have enough respect for each other to be critics when they need to be.

“If you can’t learn something from a critic, ignore them. There’s always a critic. It’s the critic that loves you enough to give you advice you can use that you should pay attention to.” Sanborn says.

The Fred Factor has been Mark Sanborn’s biggest book, and has sold a million copies in the US and another million internationally. He attributes the success of the book on what it’s about, a postal carrier who took his job and turned it into art. It’s about an average, everyday man that people can relate to. Fred built relationships and made a positive impact on the lives of others through his work. We all have the opportunity to be like Fred and turn our ordinary jobs into extraordinary parts of our lives.

Fred was Mark Sanborn’s mailman when he bought his first home in 1988 in Denver, Colorado. Fred introduced himself as Sanborn’s mail carrier and through his excellent service, the pair became friends. Sanborn wrote his book about Fred and the incredible way that he lived his life. Sanborn states that the best part about what Fred did was that he performed his work so positively because he believed he was doing the right thing. He wasn’t looking to be recognized or rewarded for his efforts.

Acknowledging the Freds in Your Life

In response to the description of Fred’s life, Hartman noted a person that he knows that reminds him of Fred.

He mentions a security guard at the gate of his high rise who hates her job. She’s never friendly and breezes through her day like the walking dead. However, inside the building is Carlos the Doorman. He loves his job and interacts with everybody in a bright and cheerful way. When he’s on duty, Hartman mentions that he never even has to take his hands out of his pockets because Carlos calls the elevator for him and presses the correct button for Hartman’s floor.

It’s important to acknowledge the Freds and Carloses in your life. People like being valued and everyone responds better to positivity. Neutrality is often negativity. It just doesn’t impact an interaction the way that positivity does.

“Everybody makes a difference; the only question is what kind.” Sanborn mentions.

Being positive might have far more of an impact on someone’s day than you think. Who knows what darkness you’re pulling a person away from by simply being kind.

In closing, Mark Sanborn offers a link to his website for more information on his ideas at marksanborn.com. He blogs, has a video library, and has various links to his social media accounts where he shares his ideas five days a week. He’s working on another book, and also provides the link to potentialprinciple.com for more information on what was discussed during this episode of the Creating Wealth podcast.