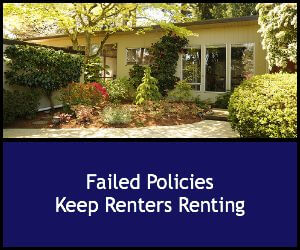 It’s practically a given in American society that owning a home is the key to stability and success. But although the US government has spent more than two decades drafting a variety of policies to create that “homeownership society,” the percentage of homeowners has hardly changed at all. And that’s good news for income property investors ready to reap the benefits of the shift to a “renter society.”

As a new article from The Washington Post points out, home ownership in the US has always represented more than just a possession. Staking out your own little plot of land was a key piece of the country’s frontier heritage. It represented steadiness and a commitment to the future. And those attitudes about homeownership morphed into the “American dream” of job, family and a secure future.

The “dream” was so important that in the years just after the Second World War, government loans and other kinds of subsidies made it possible for returning soldiers to buy homes and start the families that became the famous Baby Boomers. And in the years since then, the US has clung to that belief, creating policies to boost homeownership that not only haven’t worked, but also actually contributed directly to the crash that destroyed the housing market.

Recent statistics reveal that at the end of 2014, only 63.9 percent of Americans owned their own home. That’s the same rate charted in 1994. And as the Washington Post reports, those rates have gone up just one percentage point in 50 years, as shown by US census data.

Though homeownership has always held a special place in the American psyche, the years between 1995 and 2005 marked a particularly aggressive effort on the part of the US government to boost home buying and promote a homeownership society that would, in theory, promote economic stability and prosperity. More homeowners, it was believed, would improve lighted neighborhoods and bring stability to minority families.

Democrat Bill Clinton set a specific goal of raising the homeownership rate to 67.5 percent in 1995, and his successor George W. Bush went even further, aiming to create over 5 million new minority homeowners by 2010.

Those goals were boosted by aggressive federal policies that offered low lending rates, homeownership support programs and other kinds of subsidies designed to help those who in past years might never have qualified to buy a home. And it worked p for a while. By 2005, homeownership rates had jumped to 69 .1 percent.

Then came the crash. A combination of factors including aggressive homeownership policies, reckless lending and a troubled economy set many of these new homeowners up for failure. Unable to pay suddenly ballooning mortgage payments and keep up with fees, “marginal” homeowners fell into default and foreclosure by the millions – victims, in some ways, of the very policies aimed at helping them buy homes in the first place. Many of these former homeowners, their credit ratings tarnished by mortgage defaults, can’t expect to buy another home.

The aftermath of the push to get as many people as possible in their own homes has left fewer people in them than before. Although some of the stringent lending standards put in place after the crash have relaxed, people aren’t buying – and that means that the US may be shifting from a “homeownership society” to a renter’s culture.

That suggests a change in American attitudes toward renting, which in a society in love with homeownership has always carried a bit of a stigma. Renting is often seen as temporary, transitory and unstable – something you did on the way to buying your very own home.

But economic reality and shifting attitudes suggest that may be changing. As more and more people opt to rent long term either by choice or circumstance, the US may be headed toward a housing profile more like that of many European countries, where homeownership doesn’t convey any particular status or cultural worth.

And as Jason Hartman says, that’s good news for smart investors, who can expect to reap long-term returns from a growing pool of renters that shows no sign of shrinking. (Featured image: Flickr/wonderlane)

The Real Value of $100 in Metropolitan Areas