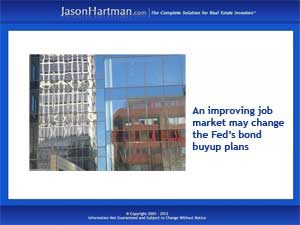 Over $3 trillion and counting. That’s the total so far of the Federal Reserve’s buyup of mortgage security bonds – a number that, as we discussed in a recent post, is raising alarms among senior representatives of regional Federal Reserve banks. Now, in another twist to the fast-forward/slow motion progress of this plan, new reports indicate that gains in job growth might put the brakes on the program.

The encouraging news about the current employment picture comes in the wake of concerns about a slowing housing market. The welfare of both these sectors has acted as a barometer for the Fed’s buyup plans, which explains the project’s erratic trajectory. Since the Fed instituted the securities purchase plan back in September 2012 to boost the housing market, rising home pries and more activity have prompted calls to wind down. But signs of a slowdown in housing have ramped it up again.

But regardless of the need to bolster weak sectors of the economy with artificial intervention, the regional bank officials and others fear that the Reserve will become overburdened with securities holding – that’s over $3 trillion of them now – and that markets will find a natural balance once the Fed stops manipulating the economy.

The improving employment picture affects the plan – and other sectors such as housing – in many ways. Job growth means more purchasing power and gives more people the stability they need to get credit and make big purchases like houses. Expansion in businesses and industry can provide a much-needed boost to neighborhoods in vulnerable areas. A better employment outlook even stimulates the rental market when companies start hiring and attract workers from out of the area.

Federal Reserve Bank officials acknowledge the mixed messages they’re sending about the progress of the plan. These zigzags, they say, demonstrate the project’s flexibility and ability to respond to changes in the economy and selected sectors such as housing. That means that a downturn in employment or a slowdown in housing could push the whole initiative into high gear again.

Even if economic indicators hold steady or improve even more, Fed officials warn that there won’t be an immediate shift in policy. A meeting to discuss the future of the buyup is scheduled for mid-June, and financial analysts don’t expect any appreciable change until at least September – a full year after the buyup project began.

In the meantime, until the Fed decides how many trillions are enough, income property investors following Jason Hartman’s guidelines for successful investing can still find low interest rates and new opportunities in the surging demand for rentals.  (Top image: Flickr/gorfor)