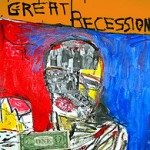 The recent financial news has been abuzz with exhortations over the anticipation of an end to the recent financial calamity. The stock market has already discounted this optimism into its valuation, as current market values represent a multiple of forecasted earnings per share well in excess of historical trends. The conventional wisdom is that the economy will get “back on track” in the next few months and resume its previous trajectory of long term growth. The factor that nobody seems to be considering is the fact that the previous ‘track’ the economy had been traveling down is the express route to collapse that generated this whole financial meltdown in the first place.

It is not a secret that the explosive economic growth experienced during recent years was largely caused by debt financed consumption artificially increasing demand for goods and services. Unfortunately, this debt bubble inflated beyond the capacity of many people and financial institutions to carry. When the bubble eventually burst, it created a cascading devaluation of financial instruments, which triggered forced deleveraging, which further depressed values, which triggered more forced deleveraging.

Now that the government is throwing money away at an unprecedented, breakneck speed there is additional stress on the system since the overspending is being financed with the undertaking of additional debt and monetary expansion by the Federal Reserve. These irresponsible actions will eventually have the impact of raising interest rates, and may push the economy back into recession.

The most likely way that this scenario will unfold is that the Federal Reserve will either contract the money supply in response to inflationary pressure or allow the currency to inflate until investors refuse to purchase bonds at face value and demand higher coupon rates. Thus, the ‘front door’ for interest rate increases is controlled by the Federal Reserve since they can contract the money supply, which will force up short-term interest rates and incentivize long-term bondholders to sell and buy short-term notes with higher yields. The “back door” for interest rate increases occurs when investors lose confidence in the ability of the government to meet its debt obligations without devaluing the currency and refuse to purchase bonds unless they are discounted by the treasury.

These interest rate increases will have two significant impacts on the economy. The first is in relation to long-term interest rates, which serve as the basis for fixed rate mortgages. When mortgage rates are forced up in conjunction with long-term bonds, it will immediately slow whatever housing recovery may be under way as it increases the cost of borrowing to purchasers. This will have the net effect of decreasing the amount of house that can be purchased per dollar of monthly payment. The impact of this phenomenon will be a downward shift in the range of home prices that people can afford, which will ultimately stall the housing recovery.

When these effects eventually spill over to short term rate increases when the Federal Reserve eventually begins a campaign to fight inflation, the impact will travel further downstream in the economy. The reason for this downstream impact is the fact that short term interest rates influenced by the Federal Reserve are the basis for revolving credit account and lines of credit that many consumers have been using to finance their consumption spending. When the short term interest rates increase, it will initiate an upward shift in the amount of interest owed on consumer debt and will also increase the required payments. This will have the net effect of reducing the amount of income available for consumption spending.

As these two effects compound on top of one another, they create a very real possibility of a ‘double dip’ recession that continues downward after a brief period of stabilization. The ultimate reason for this phenomenon is a continued campaign of market manipulation by the government to ‘stimulate’ the economy in absence of market fundamentals that are supportive of sustained long term growth. Unfortunately, this boom-bust cycle will continue indefinitely until the focus eventually returns to creating the necessary market fundamental for long term growth instead of sponsoring government programs to stimulate demand with borrowed money, but make no changes in the incentives that guide investment decisions.

As astute investors, it is important to be wary of market sentiment that amounts to ‘wishful thinking’ for an economic recovery in the absence of supporting fundamentals. Recognizing these boom-bust trends and the propensity for government entities to manipulate the financial markets is a key tool for investors that are looking to protect their wealth and prosperity. At the Financial Freedom Report, we advocate investment in real assets that are secured by fixed-rate debt and rented out to tenants as the optimal strategy for fighting this campaign of market manipulation by the government.

Financial independence is closer than you think. Buy your Early Bird ticket to the Meet the Masters of Income Property Investing educational event before February 14 to qualify for a steep discount on tickets.