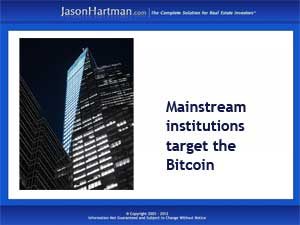 As the Bitcoin continues to surge onto the world stage, with a new push to bring big-time Bitcoin trading to Asian markets, established financial institutions and government bodies around the globe are targeting the upstart digital currency with warnings and bans. That’s a move long predicted by Bitcooin watchers, and one that confirms the power of the cybercoin to threaten traditional forms of currency.

From its early days as an intriguing experiment in computer technology, trading against “real” monies at around $25 to its current status as legitimate tender for transactions around the world in markets small and large, the Bitcoin has steadily gained clout, recently trading at around $1,000. In the process it’s gained both fame – used to buy cars and finance world travel – and notoriety – seized in cybercrime raids.

Along the way, Bitcoin watchers, including Jason Hartman, have voiced concerns that institutions threatened by the rise of the stateless, low-cost currency would take steps to shut it down. And recent actions taken by some of those entities appear to be validating those worries.

From the US Senate Committee on Homeland Security to warnings by the European Union’s Central Bank and an outright ban on Bitcoin trading by China, mainstream entities are sounding alarms as the Bitcoin gains more traction and gains a higher profile that allows it to compete directly with traditional currencies around the world.

According to a recent post by ZeroHedge, a November 2013 hearing on digital currencies featured testimony by a series of officials including the Homeland Security chair, Sen. Tom Carper, and various officials from agencies including the US Secret Service Criminal Investigative Division, and the Financial Crimes Enforcement Network. All these entities offered testimony linking the Bitcoin to crime and terrorism.

According to these individuals. Among the features that make the Bitcoin a feared tool for cybercrime and the downfall of governments are the very benefits that have boosted the coin to its current prominence: it’s anonymous, easy to use, accessible everywhere and transactions cost less than those involving traditional currencies.

The European Union’s Central Bank has now added its own warnings to the mix, advising EU members to use the coins with cautio, emphasizing the speculative nature of Bitcoin trading and voicing concerns that the Butcoib system is in inherently unstable because it isn’t backed by a physical reserve. And although Bitcoin supporters are pushing a major advance into Asian markets, the Chinese government has reversed its stance on the cybercoin, with bans on Bitcoin trading that sent the price of the digital coin seesawing against the Yuan and other relatively strong currencies.

Regardless of these and similar actions, the Bitcoin rolls on, continuing to trade high in world currency markets and extending its reach around the world as it’s accepted in more and more transactions both on and off the Internet. And the ominous warnings sounded by mainstream institutions may only serve to confirm its appeal as a free, cheap universal currency.  (Top image:Flickr/elibrown)

Durden, Tyler. “The Future of Bitcoin is in Asia.” ZeroHedgeInvesting. ZeroHedge.com 10 Nov 2013