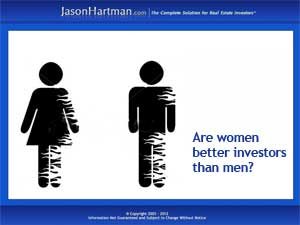 There’s a new book out by LouAnn Lofton and the folks at investing site The Motley Fool, called “Warrenn Buffett Invests Like a Girl: And Why You Should Too.” While investing like a girl might make testosterone driven deal chasers flinch, it turns out that a number of studies now show that women just might make better investors than men. And that means both sexes have things to teach each other about the road to investing success.

Although talking about behaviors in gender-specific terms raises the specter of sexism, studies conducted in both the UK and US show that some traits characteristic of men and women play a big role in their success at investing – and why men may be more prone to falling victim to investing scams and bad deals.

Women have been characterized as less tolerant of risk than men. What’s more, they tend to look more carefully at long term goals than men, and to be far less driven by impulse. And these general characteristics can boost investing success. Women investors may not jump at the latest smoking hot deal – and that means they may miss out on a once in a lifetime opportunity. On the other hand, over time, they’ll probably end up losing less in the long term when those flashy, risky deals dry up –or come crashing down.

Women investors are more likely to have the patience to wait for an investment to yield results than men are – and, according to a recent article from USA Today, that makes them more likely to hang in with investments that offer a return over time rather than an immediate pay out. That kind of thinking can be an advantage in real estate investing, where wealth is built over time from a stable long-term investment.

It’s an old cliché that women are more willing to ask directions than men. And it seems the same dynamic holds true in the investing world, where research on gender differences in money management found that women more frequently ask for advice on investing decisions, seek out qualified experts to consult, and do their own homework before making a commitment, like Jason Hartman always advises. Plus, they’re more willing to establish connections and relationships that can support their investing efforts, while male investors as a group often prefer the lone wolf route and resist asking for help.

Women may have a leg up on men in some areas that are important to investing success, but in general investing is still a man’s world. Women investors are still in the minority, and their efforts are hampered by gender stereotyping and self-esteem issues. Those things combine to create barriers for women in the investing world – but thanks to investing programs and groups designed for women, their numbers are increasing.

And the picture for men isn’t so gloomy, either. Bold moves and quick decisions are still a key part of investing success – and an approach that balances the best of both worlds means a clearer path to long term wealth from income property investments.  (Top image:ClipPix)

Time Can Be an investor’s Best Friend