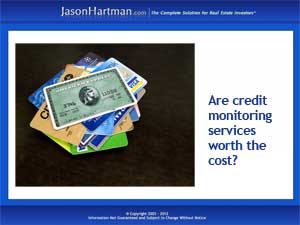 Identity theft is on the minds of many consumers, as more news emerges about major data hacks like the one that hit millions of shoppers over the last Thanksgiving holiday. And the widespread and casual use of credit and debit cards with their porous magnetic strip technology means that anybody’s account information can be hijacked, their identity stolen, and their credit wrecked.

Those concerns mean good business for the many credit-monitoring services offered by banks and other financial institutions as well as independent companies cashing in on the heightened concerns. It seems reasonable to pay a monthly fee for the convenience and peace of mind that comes from kn3oing that there are regular checks being run on your account activity. But cybersecyrity experts say that for most people, these services aren’t really necessary.

Credit monitoring services purport to help users thwart identity theft by performing such tasks as regularly checking account activity for signs of unauthorized activity and tracking the uses of debit and credit cards. They then report any discrepancies to the cardholder for further action.

So, as security professionals point out, these services don’t really protect a user from identity theft – they just identify it if it’s happened after the fact. And that’s not a bad thing in itself. Because most users don’t actually check those kinds of records on a regular basis, it can be valuable simply to get an alert if something doesn’t look right.

But the worried cardholder on a budget who isn’t at high risk for account hacking can save money by skipping the services and taking on the job of regularly monitoring their own accounts, its free to request an initial credit report from the three major credit scoring companies – Experian, Equifax and Transunion – and others can be obtained for a one time fee each time. And fraud experts say that everybody should be checking their own account statements from banks and credit card companies.

There are also ways to really thwart identity theft and card misuse before it starts. It’s wise to switch bill paying to secure online services rather than using regular mail, where cards and bills ca be pulled out of the mailbox – a low tech form of identify theft that experts say is still the most common kind. And keeping debit and credit cards in separate locations, can help if a wallet or purse happens to get stolen.

AsJason Hartman says, for an investor, good credit is an invaluable tool that’s worth diligent safeguarding. But while the convenience of credit monitoring may e worth the expense for some, hands on vigilance can often fill the bill without breaking the bank.  (Top image: Flickr/imagesofmoney)