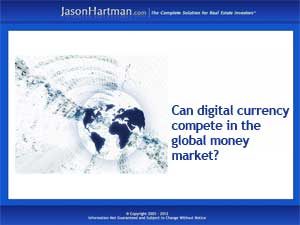 Are Bitcoins for real? Just ask UK techie James Howells, who recently tossed out a long forgotten computer hard drive, only to realize – far too late – that the device contained $7.5 million worth of Bitcoins, the digital currency that’s been making headlines as it gains traction in markets worldwide.

Howells didn’t know how much his Bitcoins would be worth when he “mined” them – solved the complex computer generated algorithms that create the coins – a few years ago. That was when Bitcoins were little more than a novelty, a new digital coin worth around $20 among the limited circle of tech geeks who traded them. But now the Bitcoin trades at $1,000. It’s cracked the big time, and the world is taking notice.

As economists and financial experts speculate that the coin might become a true global currency that challenges all other existing ones, and Christian scholars point to it as the one world currency mentioned in the prophecies of the Bible’s Book of Revelations, one thing is clear: the Bitcoin has clout. And it is a player on the world monetary stage.

We’ve been tracking the Bitcoin’s progress in this space for some time, and the coin’s journey toward respectability hasn’t always been smooth. That has led to speculation that either it would become the coin of global cybercrime, or it would be shut down by a number of organizations threatened by its anonymity and independence from conventional banking practices.

Whether those things will happen remains to be seen. But whatever the future holds, the Bitcoin – and some of its lesser known competitors such as the Litecoin and Feathercoin — have changed the way we think about money: what it means, where it comes from, and how it’s used.

Currency can really be anything that a society agrees upon as a unit of exchange, whether that society is a remote tribe, a large country, or a smallish band of tech-savvy innovators. Currency is a commodity, and in our days of highly institutionalized governments and banking entities, it’s backed by a government’s reserves.

That means currencies can fluctuate in value as economic conditions change at home and abroad, allowing “strong” currency to be worth more and “weak” currency to be worth less – hence the constantly updated currency exchanges that allow investors to speculate in monies as well as other investments. And, when currency is backed by tangibles such as gold, the market value of those assets also plays a part in keeping a country’s currency weak or strong.

By that standard, digital currency is pretty strong, at a thousand dollars to one. And as we’ve reported before, it’s not subject to those market fluctuations that make other kinds of currency swing up or down. For those reasons, and in spite of the downsides, digital currencies hold a lot of appeal in an increasingly tech-oriented world.

Dire predictions notwithstanding, digital money is clearly here to stay – and ready to take its place with other currencies on the world stage. And as Jason Hartman says, investors hoping to build wealth with income property need to stay alert and informed about the changing landscape of money.  (Top image:Flickr/BitcoinNation)

Create a new Financial Reality and Meet the Masters in 2014