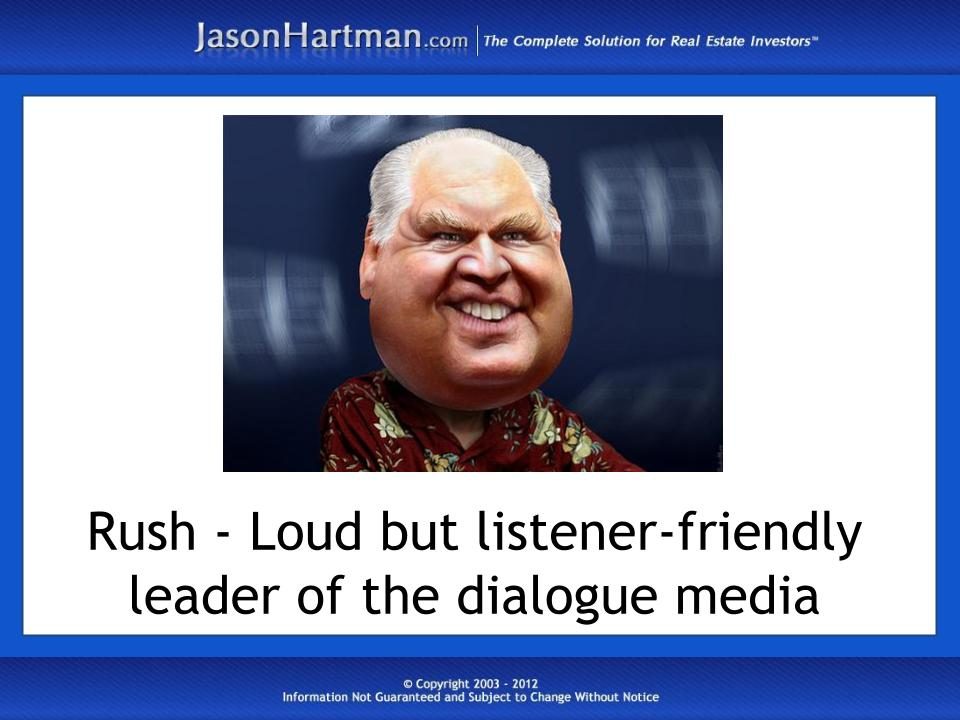 Talkers Magazine is out with its Heavy Hundred 2013 list and, once again, the result is heavily tilted towards the dialogue media. In fact, dialoguers occupy the first five spots and seven out of the top ten. In case you were wondering, that’s what you call total domination, and this pattern has been the status quo for some time now. In fact, Jason Hartman called his shot on this years ago and nailed it. What’s the difference between the dialogue media and monologue media? Here are our quick definitions:

Monologue Media – For decades, this style dominated the airwaves. It is characterized by hosts who talk at their audience and offer short shrift to dissenting opinions. A caller with the temerity to take an opposing view is likely to find themselves shouted down, personally belittled, or ignored. Rather than argue a point on the merits, the monologue media resorts to bombast. It should be no surprise to readers of this article that this choice of volume over reason is usually found on the liberal side of the political spectrum. Monologue talkers on the Heavy Hundred list are led by Ed Schultz at #6, Thom Hartmann at #9, and Joe Madison at #10.

Dialogue Media – The dialogue media is a relative newcomer to the industry, but has dominated the airwaves for the past 20 years. Dialogue media hosts realize that an actual conversation not only adheres to the time-honored principles of fair debate, but also makes for more interesting radio and higher ratings. For proof we turn back to the Heavy Hundred list. Led by Rush Limbaugh at #1, who reinvented talk radio back in 1992, dialogue media practitioners occupy the top five spots (#2 Sean Hannity, #3 Dave Ramsey, #4 Glenn Beck), as well as slots #7 and #8 (Mark Levin, Jerry Doyle).

The basic question we have is this: Do you prefer to be talked AT or talked TO? Do you like serving as a wall for someone else’s opinion to bounce off of, or do you like to hear and be heard? In days of yon (before the internet), audiences had no choice. The only media available for consumption were owned by massive conglomerates who didn’t bother to listen to their customers/listeners/viewers because they didn’t have to; they were the only game in town. Where else were you going to go? Today, there are plenty of interactive options within which to engage – blogs, podcasts, radio, television, social media, etc. It’s been a seismic shift on the media landscape, one in which the fallout hasn’t completely landed.

A dialogue media practitioner says, “I don’t agree with you but that’s okay. You have a right to express your opinion. Let’s talk about it and maybe I can convince you to see it my way.”

While a monologue media practitioner says, “Listen to me, believe me, and don’t bother offering any dissenting opinion or I’ll squash you like the miserable bug you are.”

Is it any wonder the Big Three evening newscasts are going the way of the dodo bird? (Image: Flickr | DonkeyHotey)

5 Investing Resolutions for the New Year