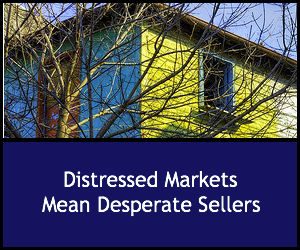 Got an iPhone? Want to buy a house?

Or, maybe you have an iPad, or an Android device. The owner of a severely troubled house in Detroit doesn’t really care. This individual, who’s now living abroad, just wants to unload the property.

That owner isn’t alone, either. In markets on both coasts and in the middle, houses are being offered for this kind of rock bottom exchange. Of course, that’s only the tip of the iceberg in terms of real costs.

A stately but very decayed mansion in California was recently on the market for just one dollar. But the buyer had to agree to do a complete restoration of the home to its original condition – a project that could cost millions. An “as-is” house is posted to an online real estate site for the price of a decent motorcycle – or a truck. The catch? The new owner must pay thousands in back taxes.

Deals like this may seem silly, or desperate. And there aren’t usually many takers, even at these bargain basement prices. But that they exist at all – and people take them seriously – point up some bigger issues affecting the US housing market after its crash of a few years ago. And those issues can affect the success – or lack thereof – of a new investor’s foray into income property investing.

As Jason Hartman says, relatively low cost properties in a flourishing area create conditions for success in rental real estate. While extreme fixer uppers to be had for a song can suck in investors hoping to make big bucks down the line, it can take years to recover the costs of that initial outlay and begin generating income.

Since the old adage “you get what you pay for” applies in real estate as well as in many other consumer purchases, bottom of the barrel prices mean – well, the bottom of the barrel. The housing crash put millions of “distressed” homes u for sale, with more coming as those held by banks and government lenders hit the market – but many of these are legitimate possibilities for building wealth in real estate. And using other people’s money in the form of a mortgage allows investors to get hold of properties with more promise than one put up in a gimmick sale.

The other issue exposed by these extreme home giveaways is the importance of location. The Detroit house is one of many left neglected and abandoned in that economically depressed city. Manufacturing is down, and people – and industries – are leaving the area for warmer and more lucrative climes. There aren’t that many people looking for homes in Detroit just now, so the area is full of red flags for hopeful investors.

That’s why Jason Hartman encourages inters to diversify and not be fixated on one particular area for buying rental properties. Economic conditions can change at just about any time – and the investor who’s put everything into one market stands to lose big if there’s a downturn that drains the area of potential renters.

And as we’ve seen, the US housing market is made up of many markets, each with its own characteristics and vulnerabilities, as unique as the investor looking to start an investing career. Detroit’s economic woes and troubled housing market represent one extreme and a cautionary tale about the ups and downs of a market still struggling in some ways to recover from the collapse of 2007-2009.

What makes a viable market? One that has a diverse economic base, with options for a variety for jobs and growth. That’s an area people are moving to, not from. In areas like these, properties are relatively inexpensive but viable, capable of attracting a population of renters able to meet the rental rates of a rising, competitive market.

That kind of area offers an investor the best opportunity to see real returns on the investment for the long term. Leveraging the power of a mortgage at low interest rates allows that investor to start building wealth, rather than losing it. You may have to pay more than a dollar, or an iPhone, to start your investing career – but in real estate as in other areas of life, deals that sound too good to be true probably are. (Featured image:Flickr/lgargerich)
Read more from Jason Hartman:

Most Expensive Naighborhoods To Rent