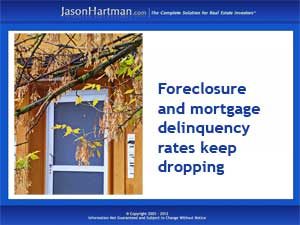 By many benchmarks, the housing market’s recovery continues, with rising home prices, more new construction and even a safer lending environment for mortgage applicants. But casting a long shadow over all these rosier indicators is the vast and stagnant foreclosure market, which in its various forms has been dragging down the rebound of the housing industry since the 2008 crash. Now, though, new figures suggest that there might be good news on the delinquent mortgage front too.

When the housing market underwent its catastrophic collapse a few years ago, millions of mortgages, most of them involving subprime loans to largely unqualified buyers, went delinquent or completely into default. Although homeowners struggled to cope with suddenly ballooning mortgage payments and other problems, many fell into foreclosure. Most were processed legitimately, but many were not, which created the “robosigning” scandal that launched investigations into fraudulent practices on the part of the nation’s big banks.

The fate of these foreclosures and delinquencies took many paths. Some became zombie properties, where owners simply walked away. Others were vampires, stuck in the foreclosure pipeline taking up space and giving back nothing on a lender’s balance sheet. Foreclosure processing slowed to a crawl in virtually all states, especially judicial ones that require a court order to seal a foreclosure proceeding.

Another side to that picture was the plight of the struggling homeowner, who was having trouble making mortgage payments or falling into delinquency. With new legislation under the Dodd Frank Act that aimed to call lenders to account for fraudulent practices, these underwater homeowners have been able to get help with mortgage payments in the form of refinancing and credit consoling to keep them from falling completely into foreclosure.

But even as housing began to improve slowly in the years after the collapse, the delinquent mortgage and foreclosure issue has dogged predictions of a complete recovery. Homeowners were still struggling, affected by other economic indicators too, including the employment picture and the state of the loan industry.

According to a new report by HousingWire, year-end figures from 2013 showed that the delinquent mortgage picture continued to improve for the fourth straight year. That means a decline in mortgage defaults, a drop in the existing foreclosure inventory, and numbers of new foreclosures not seen since before the crisis hit.

Foreclosure statistics aren’t the only indication that the housing recovery may have hit a turning point. Overall home sales were also at their highest point since 2007. Even with higher interest rates looming and tighter loan standards created by the Qualified Mortgage Rule, the new hosing picture indicates that as Jason Hartman says, now is still a good time to start building wealth through income property in an econmy that’s looking to the past for a path to the future..  (Top image:Flickr/emilystaubert)