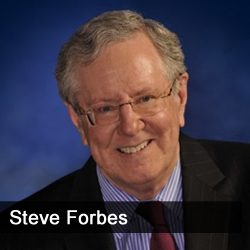 Jason Hartman is joined on this episode by Steve Forbes, the editor in chief of Forbes Media, to propose and attempt to answer the question:  Why does government get bigger and bigger when we know it doesn’t work well? Mr. Forbes states that history proves free markets work for the people, while big and over-reaching government is about meeting its own needs.

In his book, Freedom Manifesto: Why Free Markets Are Moral and Big Government Isn’t, coauthored with Elizabeth Ames, the authors delve into historic events and statistics, showing that in every instance, big government promotes favoritism, stifles economic growth, dumbs down education, and creates an atmosphere of “rigidity and scarcity.” At the same time, it opens the door to corruption.

Mr. Forbes discusses the benefits of economic freedom, which promotes creativity and growth. Jason and Mr. Forbes also talk about current economic issues, including the bubbles that the Fed continues to create in the bond market and housing. “When government undermines money, bad things happen,” laments Mr. Forbes. “When government says it’s here to help, watch out!”