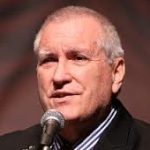 Doug Wead has served along side some of the greats in modern American politics. Doug has been close with and written books about several “First Families.” Doug’s work has been praised by everyone from Ladybird Johnson (wife of LBJ) to former Congressman and Presidential Candidate Ron Paul, whom he served as a senior adviser in the 2012 Republican Presidential Primary.

Doug was an adviser for both Ronald Reagan and George H.W. Bush. Wead also worked with George W. Bush for years leading up to his Presidency

Wead has authored more than thirty books, which are known for their primary sources. He has interviewed six presidents and first ladies, nineteen of the presidents children and twelve presidential siblings.

During the 2008 Presidential Debates, then Congressman, Dr. Ron Paul impressed Doug Wead with his non-interventionist foreign policy platform and caused him to deviate from the “old right wing” which he had served and written about dutifully for decades. As a senior adviser to Dr. Paul during the 2012 campaign for President, he was regularly featured on CNN, MSNBC and Fox News where he defended Paul’s foreign policy and monetary policy, among others.

Since the end of the 2012 election cycle, Doug Wead and Ronnie Paul Jr., eldest son of Dr. Paul, have teamed up to form The Liberty Networking Project. They are dedicated to providing those in the self-dubbed “Liberty Movement” with an opportunity to profit from the unprecedented level of net-based enthusiasm and connectedness generated during the 2008 and 2012 grassroots Presidential campaigns of Congressman Paul.

More information about Doug and Liberty Networkers can be found at