CW 308: Cyprus Bailout & The Race to Debase Currencies with John Rubino of TheStreet.com and DollarCollapse.com 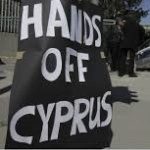 Jason Hartman and John Rubino of DollarCollapse.com tackle the latest hot EU issue happening in Cyprus with the potential implosion of the Cyprian banking system. John discusses what is on the table to bail out Cyprus and the consequences of any deals reached. He also shares his outlook for Japan, the U.S. and other countries around the world, including the race to debase currencies and the run to gold.

John Rubino manages the popular financial website DollarCollapse.com. He is co-author, with GoldMoney’s James Turk, of The Collapse of the Dollar and How to Profit From It (Doubleday, 2007), and author of Clean Money: Picking Winners in the Green-Tech Boom (Wiley, 2008), How to Profit from the Coming Real Estate Bust (Rodale, 2003) and Main Street, Not Wall Street (Morrow, 1998). After earning a Finance MBA from New York University, he spent the 1980s on Wall Street, as a Eurodollar trader, equity analyst and junk bond analyst. During the 1990s he was a featured columnist with TheStreet.com and a frequent contributor to Individual Investor, Online Investor, and Consumers Digest, among many other publications. He currently writes for CFA Magazine.

Episode: CW 308: Cyprus Bailout & The Race to Debase Currencies with John Rubino of TheStreet.com and DollarCollapse.com