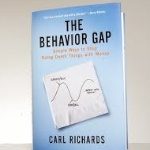 It is possible to illustrate complex financial concepts and Jason Hartman interviews author/artist, Carl Richards, who developed a way to do this and led to his book, The Behavior Gap: Simple Ways to Stop Doing Dumb Things with Money.  Carl creates simple sketches that help people understand financial concepts, which he refers to as Visualizing Finance. People are primarily visual learners and Carl found that as he made the concepts visual, it was easier to communicate them to others effectively.

He shares some of these visualizations, such as the market cycles, explaining the terms he uses and the psychology behind the buy/sell behaviors in the stock market. Using a Venn diagram, he is able to help people realize what they have control over and what they don’t, whether it’s investments or business, and enabling them to make better decisions and simplify their financial life.

Carl became an accidental artist with his simple sketches that make complex financial concepts easy to understand for thousands of people every week on The New York Times Bucks blog. Richards’ art had its first showing at the Kimball Art Center, in Park City, Utah. His commissioned work is on display in businesses and educational institutions across the country.

His sketches also serve as the foundation for his first book, The Behavior Gap: Simple Ways to Stop Doing Dumb Things with Money (Portfolio/Penguin). Carl has appeared regularly on American Public Media’s Marketplace Money, writes a column for Morningstar Advisor, and keynotes financial planning conferences and visual learning events. You can find more of his writing and sketches at BehaviorGap.com. A CERTIFIED FINANCIAL PLANNER™, Carl is also the director of investor education at BAM Advisor Services and lives in Park City, Utah, with his family.

As a financial planner, Carl Richards grew frustrated watching people he cared about make the same mistakes over and over with their money. They were letting emotion get in the way of making smart financial decisions. He named this phenomenon—the distance between what we should do and what we actually do— “the behavior gap.” A quote from his book states, “It’s not that we’re dumb. We’re wired to avoid pain and pursue pleasure and security. It feels right to sell when everyone around us is scared and buy when everyone feels great. It may feel right—but it’s not rational.”