CW 284: Private Equity Investing with David Carey Author of ‘King of Capital’ and Senior Writer for ‘The Deal’ 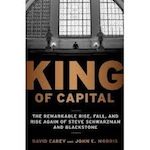 Private equity is a type of investing where you deploy capital in companies privately rather than in the public market. Here to talk about this subject with Jason Hartman is David Carey, author of King of Capital, and senior writer for “The Deal.” David explains the various forms, including injecting money into companies to help them grow faster, and the most common form, a leverage buyout (LBO).

In an LBO, private equity firms are not responsible for paying down the debt, unlike a homeowner who pays off a mortgage. Instead, the company that is being acquired takes on the debt and retires it over time using its own cash flow. David notes that most private equity firms outperform stocks and bonds by a wide margin, not just through the use of leverage, but also from improving the profitability of the companies they acquire. David goes on to share his thoughts on the attacks on private equity, Bing Capital and Mitt Romney.

Dispelling the political negative caricature of the private equity business, David shares how these firms have helped numerous companies prosper, allowing for quicker new job growth. Bing Capital was an exception, having piled on too much debt, and naturally, the Obama campaign took a potshot at the firm and private equity firms in general.

DAVID CAREY is senior writer for The Deal, a news service and magazine covering private-equity and mergers and acquisitions. Before joining The Deal, he was the editor of Corporate Finance magazine and wrote for Adweek, Fortune, Institutional Investor, and Financial World. Carey has appeared often on CNBC. He holds two masters degrees: one in French literature from Princeton and a second in journalism from Columbia. He earned his bachelor’s degree at the University of Washington.

Carey authored the book, KING OF CAPITAL: The Remarkable Rise, Fall, and Rise Again of Steve Schwarzman and Blackstone (Crown Business; October 2010), which tells how Schwarzman and his co-founder Pete Peterson, starting with just one secretary in 1985, built a powerhouse that weathered the financial crisis successfully even as other institutions crumbled. More about the book can be found at:  http://king-of-capital.com/whats-the-book-about/highlights/.

Episode: CW 284: Private Equity Investing with David Carey Author of ‘King of Capital’ and Senior Writer for ‘The Deal’