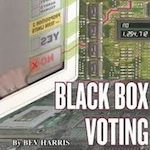 With the November Presidential election right around the corner, nothing could be more timely or more important than understanding the electronic voting system and the risk to our right for a fair and honest voting system. Jason Hartman interviews Black Box Voting founder, Bev Harris, who was featured in the HBO documentary, “Hacking Democracy,” and has been researching and writing on the subject of electronic voting since 2002 after she discovered that U.S. Senator Chuck Hagel had ownership in and had been CEO of the company that built the machines which counted his own votes.

Bev shares the seriousness of the situation, explaining that the monopoly on the manufacturing of the machines gives the corporate owners (shareholders) complete control over voting outcomes, and that the structural problems with electronic voting prevent the public from being able to authenticate.

Vanity Fair magazine credits Bev Harris with founding the movement to reform electronic voting. Time Magazine calls her book, Black Box Voting, “the bible” of electronic voting. The Boston Globe has referred to her as “the godmother” of the election reform movement. Her articles were among the first to reveal that modern-day voting systems are run by private for-profit corporations, relying on a few cronies for oversight, using a certification system so fundamentally flawed that it allows machines to miscount and lose votes, with hidden back doors that enable “end runs” around the voting system.

Bev’s investigations have led some to call her the “Erin Brockovich of elections.” (Salon.com) In 2003, just weeks after a stunning electoral upset in Georgia that tipped control of the U.S. Senate, she discovered 40,000 secret voting machine files — including a set of files called “rob-georgia,” containing instructions to replace Georgia’s computerized voting files before the election. The files she found contained databases with votes in them and the voting machine programs themselves. She downloaded the files on Jan. 23, 2003 and set them free on the Internet a few months later, where they were studied by scientists and security experts.

Bev has since uncovered more about the secret voting systems and made them public, has been served with four cease and desist orders from private manufacturers for releasing information to the public, and was investigated by the U.S. Secret Service Cybercrime Task Force, being hit with a gag order for refusing to turn over information, an action that was dropped after it was exposed by a Seattle reporter. With a voting system that has become divorced from the citizens it serves, Bev founded Black Box Voting, a nonpartisan, non-profit 501c(3) organization to help citizens fight back (http://www.blackboxvoting.org/).