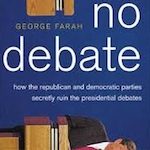 Jason Hartman is joined by George Farah, author of No Debate: How the Republican and Democratic Parties Secretly Control the Presidential Debates, and founder of Open Debates, for an inside look at how the presidential debates are a rigged game. George refers to the debates as “the Super Bowl of politics.” So what really goes on in the debates?

The people would like to know. As George explains, the debates are tightly controlled by the Commission on Presidential Debates through scripting, strict time limits, and the exclusion of third-party candidates. This commission is supposed to be non-partisan, but the reality is it’s a private corporation that was created by the Republican and Democratic parties and financed by companies like Anheuser-Busch, to allow the two main party nominees to dictate the terms of the presidential debates. A secret contract is negotiated by the Republican and Democratic parties and given to the Commission to implement.

Third-party candidates have been excluded repeatedly from the debates and the questions that the American people have are restricted and manipulated by the Commission.

Additionally, candidates aren’t allowed to ask one another questions. For more details, visit:  www.JasonHartman.com. Also, more about George Farah and Open Debates can be found at:  http://opendebates.org/.

George Farah, Executive Director: George Farah, founder of Open Debates, is an attorney at Cohen Milstein Sellers & Toll.  He is the author of the book No Debate: How the Republican and Democratic Parties Secretly Control the Presidential Debates by Seven Stories Press.  His articles have been published in The Boston Globe, The Philadelphia Inquirer, The Washington Post, The Denver Post, and other publications.

He has appeared on dozens of television programs, including “Nightline,” “NOW with Bill Moyers,” “20/20,” “CBS Evening News with Dan Rather,” “NBC Nightly News with Tom Brokaw,” “CNN Lou Dobbs Tonight,” and “Countdown with Keith Olbermann.”  He has been interviewed on over 100 radio shows.  He graduated from Princeton University and Harvard Law School.