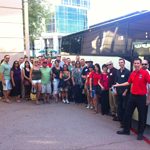 Jason Hartman provides a market profile and information on an upcoming distressed property tour in St. Louis, Missouri. Finding a strong market to invest in starts with identifying the population, job growth, and economic impact of a given region. Below is a video presentation that outlines long term data in support of the St. Louis, Missouri real estate market. If you are interested in receiving further information or investment advice regarding this market, please contact us today and one of our professional investment counselors will follow up with you as soon as possible.

Browse St. Louis Properties and contact an Investment Counselor. St. Louis, with an estimated metropolitan population of 2,866,517 is the largest urban area in the state of Missouri and sixteenth largest in the US. The city was founded in 1763 south of the area where the Missouri and Mississippi rivers merge. The city was named in honor of King Louis IX of France.

St Louis has been known as the “Gateway to the West” because of the role it played in the settlement of the western region of the United States. In 1965 the Gateway Arch was constructed, and has since become the iconic image of the city. St. Louis city is also well known for its contribution to Blues and Jazz. The St. Louis Cardinals are one of the most successful Major League Baseball teams, with ten world series titles. A wide array of successful sports franchises has led to St. Louis being called “North America’s Best Sports City.” The city has also home to the Anheuser-Busch brewery. The St. Louis region is home to many notable private corporations, including Enterprise Rent-A-Car, Edward Jones, Scottrade, and Graybar.

The city also hosts some of the largest public corporations, including Anheuser-Busch, Emerson, Energizer, Boeing Integrated Defense Systems, Purina, Monsanto Company, and Wells Fargo Advisers. In recent years, the city has gone through an urban revitalization, resulting in a net population gain for the first time since 1950. With a concentration of colleges, hospitals, and corporations, St. Louis is recognized as a center for medicine and biotechnology.

There are many museums and attractions in the city. The St. Louis Art Museum is located in the City’s premier park. This center showcases an array of modern art and ancient artifacts. Notable pieces in the collection include paintings by Rembrandt, Van Gogh, Pissarro, Picasso, and many others. The city is also home to the world-renowned Saint Louis Symphony Orchestra, is the second oldest orchestra in the nation dating back to 1880. The city hosts approximately 209,000 students who are enrolled in the area’s nearly 40 colleges, universities, and technical schools. Washington University in St. Louis and Saint Louis University are the two largest private universities in the city.

St. Louis is also home to Concordia Seminary, the oldest and largest Lutheran seminary in the United States. If you are interested in the investment opportunities available with Platinum, contact your investment counselor for a one-on-one consultation. In addition to the investment properties, ask your counselor about our coaching programs where they will work alongside you to develop a holistic strategy that merges attractive investments, solid financial planning, exceptional education, and a strong focus on personal values to help achieve your goals now and into the future. We are ready to help you realize the success that you have ever dreamed of. Are you ready to take the next step?