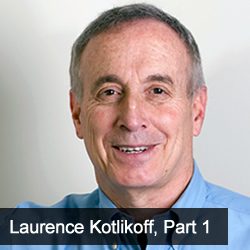 Jason Hartman and Doug start off today’s episode with a discussion on the issue of America’s retirement savings. There’s a looming problem with many people being unable to afford any form of an emergency expense, but also on the other end of the spectrum, as people are getting hit with taxes on their required minimum distributions.

Then Jason has the first part of his interview with Laurence Kotlikoff, William Fairfield Warren Professor and Professor of Economics at Boston University, about the massive amount of unfunded mandates that are awaiting the United States. Currently he has that number pegged around $239 trillion, and there are only a few ways that can be resolved.

[8:14] Equity values going up 8% a year while the real economy is only going up 2-3%, eventually something has to give

[17:57] The most recent number the unfunded mandates are going to cost

[24:52] Does Laurence believe in Supply-Side Economics?

[28:00] Consuming your way to prosperity has never worked before and won’t now

[31:20] How Laurence would have dealt with the collapse of Lehman Brothers to calm the public’s response to the start of the Great Recession

[35:03] Laurence’s take on Jason’s 6 ways the government can get out of its hole