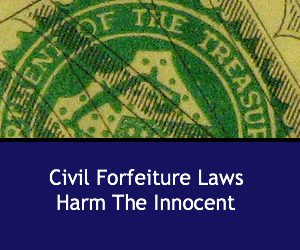 You’re not a criminal. You’re an entrepreneur or an investor who’s making regular, perfectly legal deposits to your bank accounts. But a little known law now making a lot of headlines allows the IRS and other law enforcement agencies seize those bank accounts and other assets anyway – and you may never get them back.

That’s what happened to a restaurateur in Iowa, whose $33,000 checking account was cleaned out by the Feds, and a retired Army man in Texas who saw his $66,000 account seized by the IRS, as well as hundreds of others who simply made deposits in amounts that raised red flags with bankers required to report suspicious transactions to the government.

At issue are US civil forfeiture laws, which allow the government to take and even sell private property and assets with no warning, no warrant and no filing of criminal charges. Civil forfeiture actions range from seizing bank accounts to confiscating an individual’s car, home or anything else of value.

And, to make matters worse, the law enforcement entities doing the seizing get to keep and even profit from the sale of those assets.

The restaurateur, the Army man and many others weren’t doing anything illegal. But their banking habits involved making regular cash deposits of less than $10,000 – and that alerted bank officials who are required to tip off authorities if a depositor’s banking activity fits a couple of oddly contradictory profiles.

Banks are required to notify the feds of deposits of over $10,000, usually in cash. That’s a behavior that usually indicates criminal activity such as drug trafficking or money laundering. But regular cash deposits under that amount can mean the same thing, since it’s well known that anything over the $10,000 threshold triggers alarms.

So that puts accountholders who regularly make relatively large, mostly cash, deposits at risk, even if they haven’t done anything wrong. The mere suspicion of criminal activity is enough to warrant the seizure of hose accounts – and it can be a long, tough process to recover those assets, usually at the victim’s expense.

Because victims of civil forfeiture don’t need to be charged with any crime, they don’t have access to the same due process that criminals enjoy, such as presumed innocence until proven guilty and access to legal counsel. That means the burden of proving innocence is on the victim, who usually must hire a lawyer and cover all costs related to pressing a case.

Civil forfeiture has a long and arcane history. The concept comes down from medieval times, when people believed that objects could act on their own to cause death and contribute to crime. That meant that things like wagons or cookpots could be tried as defendants, not just people.

Today, that notion contributes to the “legal fiction” that underlies modern forfeiture laws: it’s the thing itself, not the owner, that is involved with criminal activity. So, even if the owner professes no knowledge or involvement with crime, the law can go after that thing. That’s why civil forfeiture cases are called “in rem” (against a thing) proceedings, which yields up some bizarre case titles such as “United States vs. Main Street,” or “United States vs. $42,063.21 in US Currency.”

Although civil forfeiture laws have been around since the country’s beginnings, they weren’t enforced much until the “War on Drugs” of the 1980s. And when Congress established the Assets Forfeiture Fund in 1084, things really heated up. That fund allowed federal agencies to keep and spend the proceeds from forfeiture cases for themselves.

Now, civil forfeiture activity is on the upswing, with cases involving not just bank accounts but cash seized from motorists at traffic stops and cars seized off the street. Oversight is lax and forfeiture laws are full of loopholes, so law enforcement entities on the local, state and federal levels can get into the act.

New legislation is in the works to tighten the burden of proof in civil forfeiture seizures, and the
the Institute for Justice and the American Civil Liberties Union have mounted offensives against civil forfeiture laws, claiming that they violate the rights of innocent citizens. These entities have assisted civil forfeiture victims to take legal action of their own and launched information campaigns to educate people about the risks they face.

For now, though, civil forfeiture is still alive and well in every state, threatening bank account holders everywhere. That includes investors who collect and bank income from rental properties, which could be subject to seizure, along with the properties themselves. Until laws change, it’s wise to take Jason Hartman’s advice to stay educated about investing and protecting investments – even from your own government.  (Featured image:Flickr/squeakymarmot)

“What is Forfeiture?” End Civil Forfeiture. The Institute for Justice. endforfeiture.com 30 Oct 2014