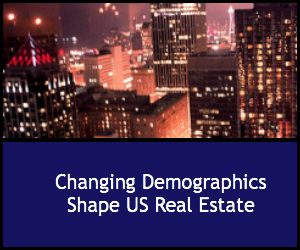 Shifting demographics in Texas, California and other states in the South and West hint at a changing socioeconomic landscape that’s here to stay. And that, according to demographer Steven Murdock, has profound implications for the economy – and for the housing market.

Murdock, former Chief of the US Census Bureau and Professor of Sociology at Rice University, discusses the often surprising findings in 2010 census data in a recent “Flash Back Friday” episode of Jason Hartman’s Creating Wealth Show podcast. And while listeners are reminded that “FBF” episodes are rebroadcasts of the best of past Creating Wealth shows, Murdock’s analysis of the major trends shaping the shifting cultural and socioeconomic landscape still hold true.

In a wide-ranging discussion of 2010 census data, Murdock discusses key patterns in population growth, demographics and behavior that are likely to drive both government policies and private sector business growth in the coming years. His findings? There’s a great divide between the behaviors and demographics of non-Hispanic whites in the US, and the fast growing younger skewing minorities, most of whom are Hispanic, Asian or African- American.

Based on census data collected between 2000 and 2010, population shifts and the changing profile of those moving into – and out of – Murdock’s state of Texas provide key insights into the dramatic shifts happening in the country at large.

Looking at population growth from all sources – immigration, in-migration from other states, and natural increase through births to existing residents – Murdock notes that areas of greatest population growth are states in the South and West, with less movement and even negative growth taking place in the Northeast and Midwest.

Texas and California saw the most significant population changes in the last census period – changes driven by a shift of major manufacturing and commercial operations to the South and West and away from the old industrial cities of the Northwest – the so-called “Rust Belt” where population largely reminds static or is even in decline.

To understand the implications of this shift, it’s important to examine the behavior of two very different population groups: non-Hispanic whites and, well, everyone else: the rapidly growing population groups of younger-skewing Hispanics, African Americans and Asians.

This group is responsible for much of the population growth in the US as a whole, and especially in those “Sun Belt’ states. As Murdock puts it, “If you aren’t diverse, you aren’t growing.” And the slow growth of cities like Chicago and the loss of population in the upper Midwest bear this out. The majority of new Texans are from minority groups – and that’s even accounting for the trend among Baby Boomers nearing retirement age to choose retirement living gin sunnier, cheaper climes.

That disparity between non-Hispanic whites and other groups is likely to continue, according to Murdock, thanks to an older, less fertile white poluatio0n compared with a much younger and more fertile minority demographic. In Texas, for example, the average white resident is a female around 40. The average immigrant, on the other hand, is likely to be a Hispanic man in his 20s.

To understand the impliat6ions of immigration patterns and a rapidly aging white population, Murdock says, it’s useful to compare what’s happening in the US with circumstances in Europe.

As host Jason Hartman puts it, Europe is fading. Murdock agrees, pointing out that European populations tend to skew older and be less fertile than those fueling most of the population growth in the US. They’re less fertile, too, with fewer children being born, to older mothers.

What’s more, while in the past European immigration was responsible for most of the population growth in the developing US, that source of new residents has largely slowed to a trickle. Immigration from European countries now accounts for a minuscule amount of growth in the Untied States as a whole.

That comes even as most countries in Europe are grappling with their own immigration related problems thanks to a larger influx of North African and Middle Eastern immigrants, many of whom are refugees.

Here in the US, though, population growth due to immigration, both legal and illegal, can be counted in the millions and accounts for virtually all growth in some states such as California, which saw a jump in population thanks to immigration even as the number of current residents leaving the state jumped dramatically as well.

So far, the long term outlook for the US social, cultural and economic landscape appears to be driven by the behaviors of two key groups: the aging, declining white population, which in many areas tends to be more affluent, and the younger, more mobile and numerous minority ones. There are others, too: Generation Y, following the Baby Boomers, are moving into the prime years of forming families and putting down career and domestic roots. And the Millennials, recent college graduates up to those around age 35, are following them with a hunger for mobility, disdain for traditional work structures and a lack of interest in the commercialism of a consumer driven economy.

The choices made by these groups about where to live, work and go to school reflect some sharp divides, too. The single, old and young, are making different choices than those with families. And in the tug of war between urban and suburban living, suburban still wins – at least for families, with cheaper land and housing to offset the cost of commutes.

What does all this mean for the future of real estate – and the fortunes of investors hoping to build wealth with rental income property? Unlocking the secrets of census data reveals key markets and identifies demographic trends that will shape the housing markets for years to come.

As home ownership rates continue to decline in key groups and the demands for rental housing surges, the emerging profile of this “new America” should stand the test of time – like the predictions of Steven Murdock in this Flashback Friday episode of The Creating Wealth Show.  (Featured image: Flickr:ju-x)

Malthusianism, Material Facts and the Cost of Opportunity