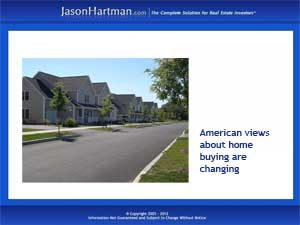 “Owning a home is the keystone of wealth, both financial affluence and emotional security,” says financial guru Suze Orman. But as American ages, suffers financial instability and becomes more diverse, the definition of “home” is changing – and that creates new opportunities – and challenges – for investors in rental income property.

The sweet suburban house with its white picket fence is no longer the face of the “America Dream.” The housing crisis of 2008 ended, at least temporarily, the dream of homeownership for many, and a bleak unemployment picture locked others out of consideration. Add to that a growing demand for rental housing among several key groups, and it’s clear that while homeownership may provide the affluence and security Orman refers to, major shifts on the social and cultural map of the US suggest that people are taking another look at what that means.

Age gender and ethnicity play a role in the demand for homes to purchase – and tied to all of these is the question of income. “Baby boomer” home owners who bought their houses in a more prosperous time in order to raise a family, may now find themselves trying to sell a large, single family home that no longer meets their needs as they near retirement age and the children have left the nest. And if they do sell that family home, a growing number of these new retirees are opting to rent – or to invest in RV living or accommodations abroad.

Young professionals make up another group choosing not to take the traditional route of home buying. These “millennials” may have only recently settled into stable employment, or are saving a home purchase for the future, when they’re ready to have children. And while home ownership isn’t off the table for them, they may prefer lower maintenance condos close to work.

Women, too, as we’ve seen in a previous post, are changing the face of homeownership too. More and more women remain single – or become single through divorce or widowhood. In all age groups, these women are choosing not to own homes – in spite of the fact that some lenders have instituted special home buyer programs aimed specifically at this group.

But while some groups appear to be leaving the ranks of homeowners, others are moving in – or returning to the fold. As minority groups nationwide gain ground in education and income, they’re taking advantage of low interest rates and relatively low home prices to secure a home that may have been out of reach. And surprising though it may seem, some mortgage lenders are even welcoming back those who lost their homes to foreclosures in the housing collapse of 2008, as the waiting periods imposed on new loan applications come to an end.

The way Americans achieve that financial and emotional security that a home represents is changing. But as Jason Hartman says, “everybody needs a place to live.” And savvy investors applying his principles can find new opportunities in the shifting demographics – and priorities – of the American housing market. (Top image: Flickr/diegoM)