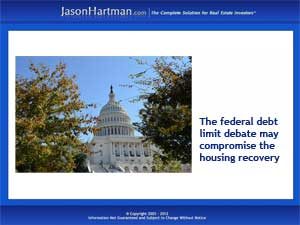 As the government shutdown drags on amid accusations and counteraccusations from both sides, a new phrase is entering public awareness: raising (or not) the federal debt limit, or debt ceiling. And the fate of this metaphorical ceiling has housing industry professionals worried about a major blow to the emerging housing recovery.

The debt limit, or ceiling, is the amount the nation is allowed to borrow, and lawmakers stand at the threshold of deciding whether to raise that limit and allow more borrowing, or to freeze it, keeping the nation out of taking on more debt. Proponents of raising the debt limit point out that the country needs to be able to borrow at a higher level not to take on more expenditures, but to pay for the ones it’s already assumed. But opponents claim that keeping the debt limit as is would cut the federal deficit and stop what they see as irresponsible government spending.

But financial experts and economists say that not raising the debt limit won’t do those things. All that would happen is that the government wouldn’t be able to borrow the money to pay off existing obligations, not new ones. What does all this have to do with housing?

Testifying before the Senate Banking Committee this past week on the impact of the debt limit crisis on housing, representatives of the National Association of Realtors told the Committee that a decision not to raise the debt ceiling could kill the housing recovery and plunge the market into a recession that could last years.

Why? The issue lies in the country’s power to borrow. When the US can’t borrow money from sources such as investors and foreign countries to cover expenditures, that means the money has to come from internal sources such as taxes and interest rates.

Higher interest rates, they argue, lead the list of reasons why not raising the debt ceiling could harm housing. Government backed home loan sources such as the Federal Housing Association and semi-governmental bodies Fannie Mae and Freddie Mac could also be affected. And the ripple effect through housing related industries such as new home construction and other services could chill the economy as a whole, with serious implications for the long-term health of most major sectors.

Debate about the debt limit is still going on, but worried industry watchers point out that the clock is ticking. If the ceiling isn’t raised, they say, the Federal Reserve’s stimulus plan — buying up mortgage backed securities to keep interest rates low – won’t offset the problems it could cause for housing.

Deadlines continue to come and go in the push-pull over what to do about the limit. But some housing industry watchers point out that raising the borrowing limit simply allows the country to do what savvy investors always do: use other people’s money to protect assets and build wealth, as Jason Hartman recommends.  (Top image:Flickr/etravelguide)

10 More Quotes to Invest By