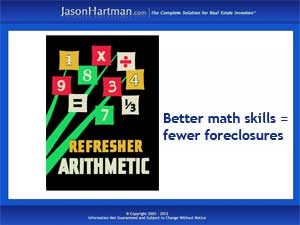 Know your math, keep your house? A new study conducted by the Columbia Business School appears to suggest exactly that. All other things being relatively equal, Columbia’s researchers found that the better a homeowner’s math skills, the less likely they were to lose a home to foreclosure or end up underwater.

According to a new report on the study by CNN Money, researchers surveyed a large sample of hundreds of homeowners who took out mortgages just before the housing meltdown of 2008, and tracked the outcome of those mortgages after the collapse. Their finding? A quarter of the subjects who scored lowest on basic math skills had defaulted within five years of taking out the mortgage. That compares to only five percent of those in the highest percentile for math.

We aren’t talking about advanced math knowledge, either – simple arithmetic does the trick. Study participants were asked to do calculations such as figuring out the price of a $300 sofa when put on a half price sale. And the findings hold true even when researchers adjusted for the usual factors such as socioeconomic status and education.

The results of the Columbia study also contradict some beliefs about the meltdown. Unscrupulous mortgage lenders were accused of misleading gullible homeowners with complicated mortgage products, which set them up for failure. Careless mortgage lending was also blamed for the massive numbers of defaults from “subprinme” borrowers who weren’t really qualified for home ownership in the first place. Those things were certainly true.

But it turns out that even so, poor arithmetic and budgeting skills were still a pretty potent predictor of success or failure with the mortgage – so much so that some consumer groups are advocating a basic financial skills course as a prerequisite to getting a mortgage.

That may be a bit extreme. But more general math skills might help struggling homeowners become smarter money managers, and that in turn could help keep the housing recovery on track. And for those launching a new career as income property investors, there’s a clear takeaway too.

Financial savvy improves chances for investing success. Staying educated, informed and in control of your investments are core painkillers of Jason Hartman’s investing strategies. That includes staying on top of he financial side of things –mortgages, taxes and other costs — associated with buying and holding investment properties. For investors aiming to build wealth through real estate, doing the math may be a key to success.  (Top Image: Flickr/samhsiehan)

Is the Mortgage Interest Deduction in Jeopardy?
Search Engine Over-Optimization