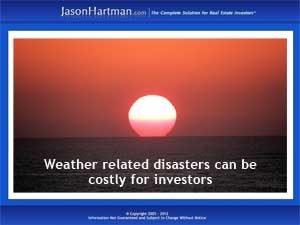 Can a baby harm your income property investments? Maybe so, if that baby is the dreaded weather phenomenon known as El Nino, (in Spanish, “the child, the baby”). Bringing with it drenching rains to some areas and parching drought to others, El Nino is making property owners take a hard look at their insurance policies – and their pocketbooks.

El Nino was so named by Portuguese sailors who observed that at certain times the ocean waters they sailed became much warmer than usual. Because that generally happened around Christmastime, they called the phenomenon “El Nino,” with reference to the Christ child. (El Nino’s counterpart, “La Nina” brings cooler waters.)

El Ninos come and go irregularly, and though the rising of water temperatures in the Pacific usually herald the start of another cycle, it’s hard to predict when that will happen. The last major El Nino cycle was in 1997-1998 and caused massive damage to coastal regions of the US and other countries.

What happens during an El Nino cycle? Depending on where you live, a little – or a lot. Depending on its strength, an El Nino can bring heavy rainfall to west coast areas, causing flooding and destroying coastal building with high waves. In other parts of the world though, the same cycle might bring high winds, tornadoes or searing heat.

Any or all of these things can bring headaches for a property owner. Houses might suffer flood damage, roof collapses, or be swept away in mudslides. Heating and cooling costs may rise. And high winds can bring down power lines and trees or rip away roofs. And the cost may end up coming out of an investor’s pocket if the right insurance provisions aren’t in place.

It’s important to make sure that your insurance policy is one tailored to the needs of a rental property owner, not a residential homeowner. Take a close look at what’s covered under natural disasters. In a basic policy, not much is – coverage for things like earthquakes and floods has to be added in the form of riders to the policy. It’ s also wise to prepare for some additional costs in the form of energy or repairs – just in case.

El Nino will be here sometime in the next few months, and there’s not much anyone can do about that. But as Jason Hartman says, a successful investor is being a cautious one, so it’s important to be prepared – before the Baby breaks the bank.  (Top image:Flickr/boscdanjou)