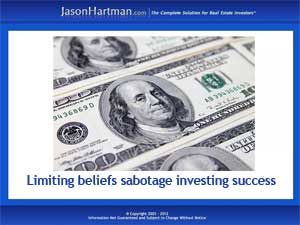 Think and grow rich! Force the Universe to give you whatever you want! The promise that you can build wealth just by changing the way you think lures people to buy books and videos and courses. And while that may seem to be the empty hype of self help gurus whose way to gain wealth consists of persuading you to buy their guides on how to visualize wealth, a number of successful investors and entrepreneurs credit cultivating a mindset of abundance with boosting their money-making efforts.

Why? It’s a matter of alignment, say practitioners of abundance thinking. If your conscious mind wants to build wealth and is trying to take steps to do that, but the subconscious is holding on to old, limiting beliefs, you may sabotage your investing efforts without realizing it.

When a team with a long losing record comes within a basket, or a touchdown, of winning, they often blow it. And coaches say they don’t know how to win. The team has been losing so long that they’ve come to see themselves as losers, not winners, so when the opportunity to win comes along, they don’t know what to do.

Advocates o cultivating abundance say that half the battle is switching to a belief in abundance – that wealth and other things you want really can become a reality. A “scarcity mentality” keeps investors from taking risks, trying new strategies – or even from starting an investing career at all, because they don’t see a positive outcome ahead and they need to hold on to what little they have.

But a belief in abundance – that resources are available and profits will come – can open doors to new opportunities and reduce the fear of risks. Many people learn that scarcity mindset when they’re very young, especially if they’ve lived in financially limited circumstances, so it can take some work to discover and challenge those limiting beliefs about money.

Visualization helps, say lifestyle coaches and psychologists. Acting “as if” you’re already wealthy can release some of the barriers to gaining wealth. That can mean something as small as creating a collage of pictures that reflect the reality you’re trying to create, or imagining your bank account with a few more zeros. Affirmations can help some people, too. Saying every day, “I live abundance,” or “I’m creating wealth every day,” can send new messages to the subconscious about the new reality you want to create.

Of course, simply imagining wealth alone won’t make your investing goals a reality. That has to be backed up by actions, like those outlined by Jason Hartman in his series of Commandments for Investors: get educated, get good advice and get started. But shifting from a mindset of scarcity to one of abundance just might be the action to take to remove barriers to investing success.  (Top image:Flickr/imagesofmoney)