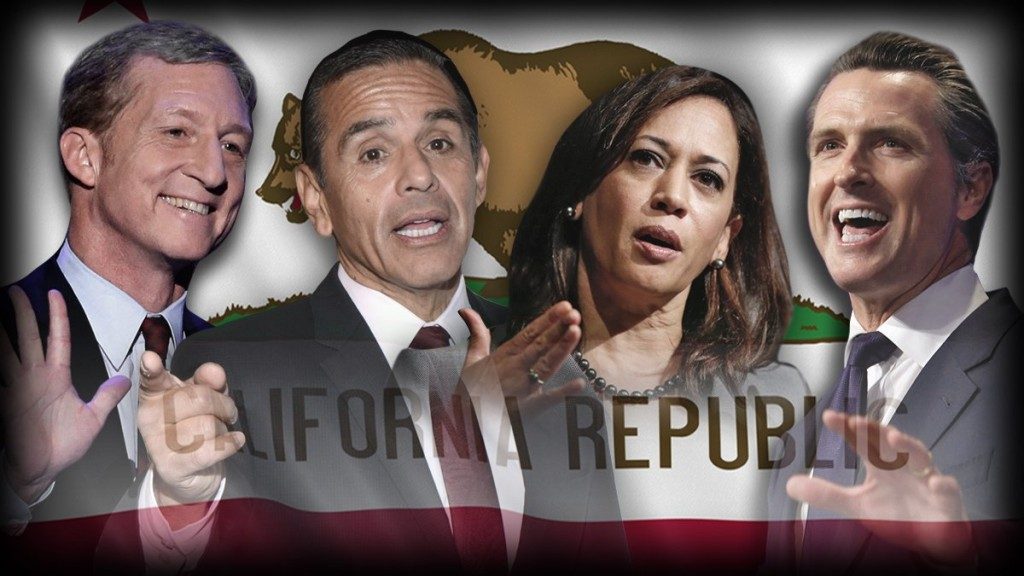 Yahoo News – In most corners of the country, a competitive Senate race isn’t an earth-shattering event. After all, there’s a new one every couple of years.

When Barbara Boxer announced on Jan. 8 that she would be retiring after her current term ends in 2016, Golden State politicos reacted with the sort of panting excitement usually reserved for a regime change at, say, Buckingham Palace. Boxer, 74, has been in the Senate since 1992 — nearly a quarter-century. So has her 81-year-old colleague Dianne Feinstein. Jerry Brown, 76, is currently serving his fourth — fourth! — term as governor. He first took office when Gerald Ford was president.

Brown isn’t allowed to run again after 2018; Feinstein’s current term ends the same year. So the response to Boxer’s announcement, from San Francisco to Sacramento to Los Angeles, was pretty much unanimous.

Yes! At long last! A new generation of California Democrats will finally get a shot at major office!

By bowing out, wrote The New York Times’ Adam Nagourney, Boxer will be “breaking a generational logjam” and “signal[ing] what many Democrats, especially younger ones, have been waiting for across this state: the beginning of a wave of retirement by an older generation of Democrats who have dominated the upper realms of elected office.” In a column for the Huffington Post, Tom Steyer, the billionaire climate-change activist who briefly considered a Senate bid and will likely run for governor in 2018, declared that “Washington Needs to Be Shaken Up So the Next Generation of Americans Can Get a Fair Shake.” Not to be outdone,California Attorney General Kamala Harris — the first politician to jump into the race — alsomade sure to sound a generational call to arms. “I will be a fighter for the next generation,” she said in her official announcement.

But amid all the next-generation hubbub, no one has bothered to ask the obvious question:

How does this new generation of California Democrats differ from the previous generation? Are they just less elderly? Or are they actually planning to chart a new course for the state?

“You have these tectonic plates shifting in terms of who is in office and what that will mean.”

This isn’t only an important question for California. It’s an important question for the entire Democratic Party — and possibly the entire country. “This is a political earthquake,” said San Francisco-based Democratic consultant Chris Lehane, a veteran of the Clinton White House and former spokesman for Al Gore. “You have these tectonic plates shifting in terms of who is in office and what that will mean.”

There are two reasons California’s political upheaval matters outside the state. The first is that changes in California have traditionally paved the way for larger changes in American politics. “California has been a policy laboratory on a number of fronts for several decades,” said Dan Schnur, a former spokesman for Pete Wilson and John McCain who currently teaches politics at the University of Southern California. “And that cuts across party lines.” In 1978, the passage of Proposition 13 bolstered the conservative tax-cut agenda; in 1990, Proposition 140 kick-started a nationwide term-limits movement. More recently, San Francisco played a leading role in the push for same-sex marriage, and Sacramento has been ahead of the national pack on environmental protection.

The second reason California’s political earthquake matters is that the state has an outsize influence within the Democratic Party itself. “If you’re looking at the constituency groups, if you’re looking at labor, if you’re looking at fundraising — California is the epicenter of all of that,” said Lehane. “So there’s no question that any of these candidates could potentially have a really specific issue or set of issues that they want to focus on, and they could leverage the California platform to really move it forward.”

And so you have Harris (50). You have Steyer (57). You have former L.A. Mayor Antonio Villaraigosa, 62, who is “seriously considering” a 2016 Senate bid. You have former San Francisco Mayor Gavin Newsom, 47, who is eyeing the governor’s mansion. And you have plenty more waiting in the wings — “a pretty deep bench of folks who have been looking to make that next big move,” in Lehane’s words. Can they change California, and perhaps the country?

To figure out where California’s new class of Democrats wants to steer their state, pay attention to policy. Sure, the 2016 and 2018 campaigns will be more expensive and digital than the relatively uncompetitive races Boxer, Feinstein and Brown have run in recent years. And the candidates themselves are more diverse than their predecessors. (Harris is half-Indian, half-Jamaican; Villaraigosa is Latino.) But analysts insist that the so-called Next Generation will only truly live up to their billing if they find new ways to champion California-centric issues such as immigration, income inequality, climate change and technology.

The potential is there. In 1992, the California electorate was 82 percent white; by 2012, that number had plummeted to 55 percent. Last march, Latinos surpassed Caucasians as the state’s largest ethnic group, and that gap will continue to widen. According to Santa Monica-based consultant Garry South, who is close to Villaraigosa, the former L.A. mayor “could be an historical figure who drives Latino turnout the way Barack Obama drove black turnout in 2012.” (California has never elected a Latino senator or governor.) If Villaraigosa were to win, South continues, he “could certainly become a national voice in respect to immigration,” bringing his been-there, done-that Golden State perspective and across-the-aisle legislative skills to bear on Washington, where both parties recognize that America is heading in California’s demographic direction.

Someone like Harris, meanwhile, is well positioned to emerge as a leader on income inequality, which is more pronounced in the Golden State than anywhere else in America. California is now home to 111 billionaires, by far the most of any state. Yet it also suffers from the highest poverty rate in the nation — more than 23 percent. As a district attorney and state AG, Harris has prosecuted financial fraud, battled big mortgage lenders on behalf of underwater homeowners, railed against truancy and pursued the sort of “smart on crime” approach that California voters ratified last fall by passing sentencing reform (via Proposition 47). Harris refused to take a position on Prop 47, but in her campaign announcement she vowed to be “a fighter for middle-class families who are feeling the pinch of stagnant wages and diminishing opportunity.” If Harris keeps her promise, she could join Elizabeth Warren, who has already endorsed her, in advocating for innovative new legislative approaches to America’s (and especially California’s) most pressing economic problem. “Every Senate candidate of both parties is going to repeat the phrase ‘income inequality’ almost relentlessly,” Schnur predicted. “It will be interesting to see if a state-based agenda in that area can lay the groundwork for a national discussion.”

“Newsom, who ran the most tech-savvy city in America, could partner with Silicon Valley in groundbreaking ways.”

On climate change, Steyer would be the obvious standard-bearer. In 2014, he spent a staggering $65 million to get climate-friendly Democrats elected, and if he were to run — and win — in 2018, he would undoubtedly push his state’s environmental policies far beyond anything America has ever seen. “With NextGen [Steyer’s PAC], he has a platform to do something you really haven’t seen on the left — a progressive platform with real resources behind it,” said a Steyer adviser. “And someone who’d be in office — that creates some real synergies.”

And then there’s technology. “When Boxer, Feinstein and Brown came to prominence, Silicon Valley didn’t exist the way it does now,” Lehane said. “And Silicon Valley isn’t only important in California. It’s the economic epicenter of the U.S. and arguably the economic epicenter of the globe. And it’s only going to become more so.” A candidate like Newsom, who ran the most tech-savvy city in America and first hit a million Twitter followers when he weighed a run against Brown for governor in 2008 and 2009, could partner with Silicon Valley in trailblazing ways. In fact, that’s what his 2013 book, Citizenville, was all about: using private-sector technologies like YouTube, Google, FarmVille and the Apple App Store to increase public-sector transparency, communication, citizen engagement and efficiency. “It’s indigenous to him,” said South, who advised Newsom during that campaign. “He understands it instinctively.”

These issues, of course, aren’t new; politicians have discussed and debated them for years. But California’s Next Generation now has an opportunity to take the debate to the next level. Thanks to the post-Boxer, post-Feinstein rise of small-dollar online donors, they will have “more latitude on the issues” than older politicians, who have relied largely on “maxed-out contributions from special interests,” according to South. And because California has become almost monolithically Democratic in the years since Boxer and Feinstein were elected — current GOP registration is 28.2 percent, down from nearly 40 percent in 1992 — Harris & Co. will have even less need to moderate their ideas to win Republican votes.

The Next Generation could actually alter the political landscape in California — and beyond. The question now is whether they’ll be willing to shake things up.