Buy or Rent? Do the Math 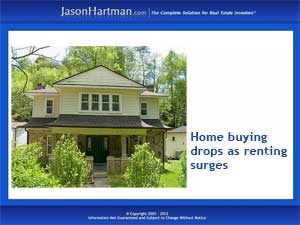 For decades, the promise of homeownership has been part of the “American Dream.” But these days, more and more Americans are dreaming a different dream, one in which homeownership no longer plays a part. As a new report from the Wall Street Journal points out, homeownership may not be the most economical housing option for a growing number of people. And that may be good news for investors.

Time was, owning a home meant stability, security and an investment in the future. Young families scrimped and saved, planning for their children’s lives and their own retirement. But rising home costs and an increasingly uncertain job market – along with the growing acceptance of alternate life choices – are changing that picture, not just for those young families, but also retires and everybody in between.

As the Wall Street Journal reports, the median price of an existing family home rose by over 11 percent in 2013good news for the recovering housing market overall but putting the purchase of those homes out of the reach of many would be buyers.

At the same time, the monthly cost of renting came in lower than an equivalent monthly mortgage in 20 of the country’s largest markets. And a comparison of the benefits and drawbacks of buying versus renting appears to tip the scales toward renting for many people.

The obvious benefit of homeownership is of course equity. But as we’ve seen, that equity doesn’t always offset the expenses of owning a home, even with the tax breaks available to homeowners. Factor in ongoing expenses for maintenance and the difficulty of moving quickly if necessary, and you have a =pretty good case for renting, especially for singe professionals and retirees who like traveling.

Renting means a monthly outlay you’ll never get back. But that also means a landlord handles repairs and maintenance, and you can get out easily once the term of a lease or rental agreement is up. And it’s possible to rent houses equivalent to those up for purchase.

It’s worth remembering that, renting was always cheaper than owning a home before the great housing bubble that put home ownership in the hands of virtually everyone. And the crash that followed created a whole new pool of renters who couldn’t gee back into the housing market.

But the winner in the whole own versus rent debate is the income property investor, who ends up with the best of both worlds. As Jason Hartman advises, investing in income producing property provides the benefits of home ownership with its attendant tax benefits and leveraging, along with the steady income that comes from that growing pool of people who choose renting over owning. Do the math, as the saying goes – and it’s the investor who wins. (Top image: Flickr/lgargerich)

A Few Assumptions Worth Making