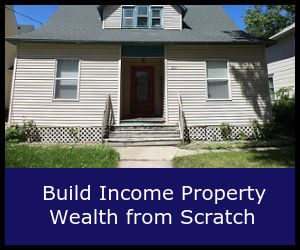 Jason Hartman’s special guest on episode #309 of The Creating Wealth Show was Roger Salam. In addition to writing two books on real estate, Salam worked with globally recognized motivational speaker Tony Robbins for a time, before founding his own business, The Winner’s Circle. Perhaps of even more interest to listeners is a discussion between Jason and Roger tracing his rise in the income property investing arena.

Starting with a single property in a drug-ridden Tampa neighborhood, Salam’s portfolio eventually held hundreds of properties. But before welcoming Roger to the show, Jason discussed a few separate topics with a previous guest, Michael.

The Cypriot Bank Holiday Everyone Hates

Everyone normally loves a holiday, right? Not this one. Jason has previously talked about the joint “austerity” measures undertaken by the Cypriot government and banking system. As a quick review, this “holiday” took the form of seizing control of private money stored in checking and saving accounts. After close of business on a recent Friday, banks announced that no money could be withdrawn electronically or by any other means until the next Monday.

When Monday arrived, the following limitations were in place:

* 300 euros daily
* Only 1,000 euros could be taken out of the country
* Any business transaction over 5,000 euros had to be reviewed and approved by the government

Jason emphasized the idea that we shouldn’t assume that, as Americans, we’re insulated from this kind of heavy-handed asset seizure. The economic approach undertaken by the U.S. government, characterized by out-of-control currency printing, has the potential to create the same scenario as in the tiny country of Cypress.

How can we protect ourselves? Own and control things rather than fiat currency. It’s harder and less appealing for a central banking system to seize property and houses when so many people have piles of cash sitting in a checking account that’s ripe for the taking.

Next, Jason took the opportunity to discuss a chart he created that illustrates exactly how Inflation Induced Debt Destruction (IIDD) really works. This is exactly the process by which he has generated millions of dollars for his own portfolio over the years and help countless others find their way to the land of financial independence.

What we’re hoping to make clear by this example is how inflation will increase the value of your property while reducing the principal you owe on it, even if you pay nothing but interest. For discussion purposes, assume you took out an even $1 million loan to buy 10 homes, each priced at $125,000. Also assume that there is an annual inflation rate of 10%, which is pretty realistic no matter what the government claims.

The key to the following numbers is to wrap your head around the idea that a 10% rate of inflation will decrease the value of your mortgage debt each year by nature of money being worth less. At the same time, inflation increases the price tag on your property, which is a good thing, especially if you ever decide to sell it.

We apply a second round of inflation at the end of year two, leaving a mortgage worth $810,000 and an income property portfolio value of about $1.512 million

If you continue to follow this process of tracking the inflation effect, we come to the end of a decade of property investing owing only $349,000 on the mortgage, while holding ten properties worth a combined value of well over $2 million.

This is the only form of investing that allows you to profit from inflation. It’s why Jason refers to inflation as the ultimate transferer of wealth, from lenders to borrowers. The bottom line is that, as long as we live in inflationary times, it pays to borrow money.

Following his stint with Tony Robbins, Roger had the (mis)fortune to find himself at the head of a now defunct tech company when the dot.com implosion happened just before the turn of the century. He found himself sitting alone at home, head in hands, watching late night infomercials about real estate investing.

Before long, he bought a 650 square foot, 1 bedroom, 1 bath house in one of Tampa’s worst neighborhoods for $15,000 cash that he managed to scrounge off his lone remaining working credit card. After pumping $12,000 worth of remodeling into it during his first month of ownership, the house appraised for $60,000.

But he didn’t sell. In fact, he found that he had a love and affinity for turning “junkers into jewels.”

Roger’s goal was to buy other dilapidated houses on the same block, engaging in his personal version of regentrification. Before long, Salam’s property portfolio numbered in the hundreds. He still insists the main barrier to most people’s investing success isn’t lack of knowledge but rather lack of confidence.

Roger quickly fell into putting together the team, systems, and processes to leverage his real estate investing into the major leagues. He turned his attention to better properties in better neighborhoods. Before long, he realized he needed a more robust source of cash for the operation.

Private money investors were manna from heaven! Salam purchased a list of people who had at least $100,000 in the bank and invited them to his seminars, where he pitched them on earning 12-15% return on investment for their first deal and 10% thereafter. It turned out that people were eager to loan him money, some even opting to go all in and become partners. These days, though, Roger doesn’t start seriously talking to investors unless they have at least $10 million in the bank.

You can learn more about Roger Salam and his approach to financial and personal success at his website www.TheWinnersCircleInc.com. (Image: Flickr | Brandon Blahnik)

The Hard Science of Success and Motivation