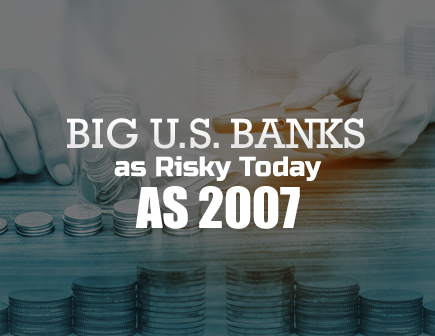 Despite legislation and regulatory initiatives designed to avert a repeat of the 2008 financial crisis, an independent research arm of the U.S. Treasury Department warns that the financial system is still at great risk should one or more big banks fail, the Wall Street Journal reports. In particular, regulators in the U.S. may not be able to restructure, let alone wind down, more than one global systemically important bank (G-SIB) at a time, and do it swiftly enough to stabilize the U.S. financial system, the U.S. Treasury’s Office of Financial Research (OFR) writes, per the Journal.

The OFR report carries great credibility and weight, especially in light of the Treasury’s critical role in stemming the 2008 crisis through measures such as the TARP program. Of the 30 G-SIBs identified worldwide, eight are based in the U.S., and include the “big five” of JPMorgan Chase & Co.

A lingering concern for the OFR is the danger posed by the big banks’ portfolios of derivatives, which are valued in the trillions of dollars, and which were a major factor in the escalation of the 2008 crisis, the Journal says. Indeed, when Lehman Brothers failed in 2008, its counterparties​ terminated many of their derivatives contracts, thereby sending bigger shock waves through the financial system.

The Dodd-Frank Financial Reform Bill not only set up the OFR, but also the Orderly Liquidation Authority (OLA), a process managed by the FDIC as an option to resolve bank failures without resorting to bankruptcy, as Lehman did. The OFR is concerned, per the Journal, that if Congress repeals the OLA provision, there might be a replay of the Lehman scenario, with the same dire consequences.

While most banks hold their derivatives in entities that would be subject to FDIC oversight even without the OLA, the OFR report notes that Bank of America, Goldman Sachs, and Morgan Stanley (MS) all have large derivatives positions in non-bank subsidiaries that are beyond the FDIC’s purview.

The FSB and GSIBs

The Financial Stability Board (FSB), an international body based in Basel, Switzerland, released its 2017 list of G-SIBs on November 21, based on analysis of data from year-end 2016. The list includes 30 institutions, eight of which are U.S.-based. The banks are divided into five “buckets,” based on the required levels of additional capital buffers, which reflect their relative importance to the global financial system, as judged by the FSB. There is no bank currently in bucket 5, the most systemically important classification.

These are the eight U.S.-based banks among the G-SIBs, listed by bucket, per the FSB’s November 21 report:

JPMorgan Chase is the only member of bucket 4. Last year, Citigroup also was included. Bucket 3 has two other members, German-based Deutsche Bank AG (DB) and U.K.-based HSBC Holdings PLC (HSBC). The next iteration of the FSB report is scheduled for November 2018.

Bank of New York Mellon provides about 80% of the clearing and settlement services for the $2 trillion U.S. repo market, and will become the sole provider in 2018, making it an even more critical financial choke point. (For more, see also: 12 Forces May Kill Stocks Despite Tax Reform Euphoria.)

Additionally, BNY Mellon and State Street each have about $30 trillion of assets under custody and administration, the top two banks worldwide in this regard, combining for about 30% of the global total, per Forbes. The next two biggest are JPMorgan Chase (about $25 trillion) and Citigroup (about $18 trillion), bringing the total for this big four to a mind-boggling $103 trillion, or around half the worldwide figure, Forbes estimates.