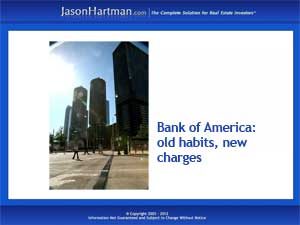 Just when it seemed the dust was settling in the various lawsuits and settlements resulting from charges of mortgage and securities fraud leveled at the nation’s biggest bank, new reports reveal that Bank of America is once again in trouble. This time the financial giant faces charges that it broke key agreements in a multibillion-dollar settlement deal reached in 2011.

Bank of America, which regularly makes the top ten of the most hated institutions in the country, has been a major player in numerous ongoing lawsuits alleging that the bank, and others, committed a variety of fraudulent acts and practices dating back to the housing meltdown of 2008.

BofA was one of 16 major lenders named in a lawsuit filed by state attorneys general regarding the infamous “robosigning” scandal after the housing collapse, when massive numbers of foreclosures were processed with fake signatures and no oversight. In that case, the banks involved agreed to settlement of over $6 billion to bee distributed among the scandal’s victims.

Then, Bank of America, along with other lenders, became the defendant in several lawsuits involving charges that the bank and its co defendants had fraudulently reported data used to calculate LIBOR (London InterBank Offered Rate) rates used to for short term lending worldwide. Narrowly escaping charges of violating antitrust laws, the bank and its fellow defendants still face allegations of fixing the rates.

Now, as the bank continues to fight some of these suits it’s embroiled in a new controversy – that a settlement deal totaling $8.5 billion reached in 2011 between BofA and some of its investors is now in question in light of charges from the plaintiffs that the bank violated terms of the settlement to further its own interests.

According to a new report by The Motley Fool, the current case involves 530 mortgage trusts sold by the now-defunct Countrywide Financial, a corporation purchased by BofA. The plaintiffs in the case – the investors – claim that the Bank of New York Mellon, acting s trustee for the investors, failed to act in good faith, thus calling the entire settlement into question.

If a New York State Supreme Court rules against BNYM’s parent Bank of America on May 30, 2013, some financial experts estimate Bof A’s latest penalty at around $60 billion. That’s in addition to the amount the bank must pay out in the original settlement.

The lawsuits aren’t over for Bank of America. As they roll on, with penalty after penalty assessed against the banking giant, property investors following Jason Hartman’s recommendations for financing income property, one lesson may be that Bank of America never learns its lesson. (Top image:Flickr/CarolHart)