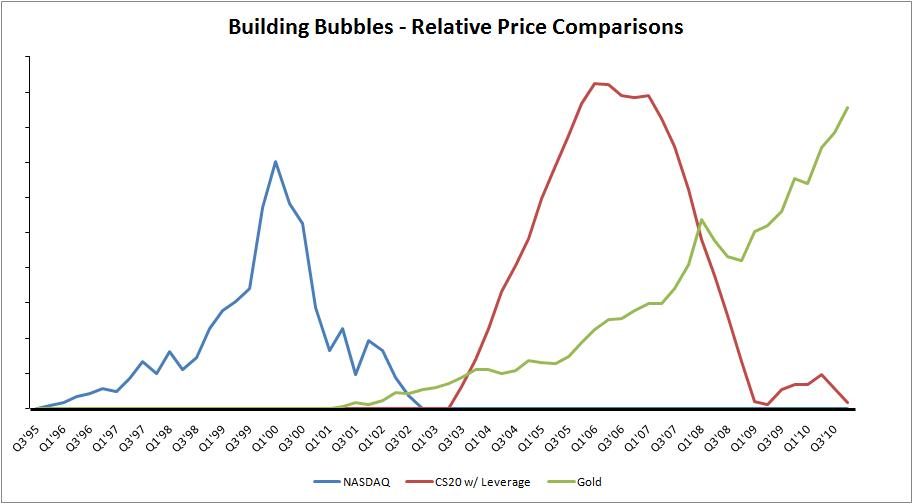 When examining market bubbles, it is critical to understand exactly what they represent. Fundamentally speaking, a market bubble emerges when expectations about the future growth for a certain asset grow so high that people sacrifice future production and consumption for the sake of investing in that asset. This was the case for tulip bulbs in Holland, Technology stocks in the 1990’s, real estate during the early 21st century and possibly gold today.

The importance of this insight comes from a deeper understanding of what free markets naturally do, and how bubbles distort this necessary function. The most critical role of a free market is to allocate capital to its highest and best use through investors seeking the best (risk adjusted) rate of return on their capital. Thus, in a normal market situation, businesses and investments with the best fundamentals and highest prospects for real growth will be the ones that attract the most capital.

However, there are many situations where public policy either directly or indirectly creates market bubbles. When the tax or regulatory status of a certain investment class is artificially altered by the government, it can create a bubble. (Tax credits for politically favored companies and industries for example). When government policy makes financing artificially easier to obtain than would have been possible in a free market, it creates a bubble in assets that are purchased with financing due to a fresh influx of buyers. (This is literally what created the real estate bubble).

In the case of the technology bubble, it represented the intersection of the internet moving into the technological mainstream, and an influx of venture capital that perpetuated valuations upward as multiple online entities all attempted to dominate their respective market niche by incurring substantial losses for the sake of growth. Each player in the marketplace spent significant investor resources, signed leases, bought equipment, and made other expenditures in anticipation of future profits. Unfortunately, ten companies cannot dominate the same market niche. This means that the (many) entities who failed to meet their growth and profitability projections went out of business. This phenomenon resulted in a sudden halt for technology demand that rippled out to the broader economy.

Analysis of the NASDAQ 100, Case-Schiller 20 index (with leverage) and Gold prices over time tell a very distinctive story. From Q3’95 through Q1’00, the NASDAQ 100 increased by 450%, but by Q4’02 all of those gains had been lost. From Q3’03 through Q1’06, leveraged real estate returns increased at an even faster pace, but began to downslide in 2007 and were accelerated by the financial crisis of 2008. When gold is added to this chart, it tells a very similar story. Starting in Q1’01 through the end of 2010, gold has risen by over 500%. The course of past bubbles has been one of rapid escalation followed by an equally rapid collapse. Gold has been increasing in price considerably over the past few years, and some are even beginning to proclaim the emergence of a new paradigm where gold perpetually escalates in value. Coincidentally, this is almost the exact same rhetoric used during the technology and real estate bubbles that subsequently burst and deflated. Only time will tell the future of gold, but it is showing many features that are similar to past bubbles.

As we can clearly see, the incidence of bubbles principally occur when something artificially skews incentives for market players and investors. In this situation, people perceive future profits based on artificial market movements. This shifts resources from other uses with greater rates of real productivity toward things like building more housing. This artificial shift escalates prices as people bid-up values for resources and end-products. To the bubble market players, this appears to be evidence that a new paradigm is emerging since prices are moving up and people are making lots of money. Of course, the point ultimately comes where new buyers cannot be found who will pay higher prices and the value collapse ensues. The people who are in at the beginning of a bubble make money like bandits. However, the folks who enter too late end up paying the price for those profits captured by the early movers. No value is created … all the profits from early movers come at the expense of late entrants.

At the end of this cycle, we end up with many entities going bankrupt and a large amount of de-valued product from the bubble collapse. In addition to the direct losses that bubbles create, there is an even more dangerous effect. This effect is the lost productivity from capital that was taken away from more productive uses and spent in pursuit of a market bubble. Every person who chases quick money instead of fundamental value plays a small part in suppressing the nation’s long-term economic growth. Every bubble that rises and crashes destroys future growth by siphoning capital away from more productive use.

As individuals, we are in the unfortunate situation where our actions cannot directly stop bubbles or change the course of public policy. However, we can ensure that our own activities are engaged in the pursuit of fundamental value instead of market bubbles. As businesspeople, this means avoiding fads or get-rich-quick schemes. As investors, this means focusing on providing real products and services that provide real value to real people. It means focusing on activities that generate real cash flows instead of staking all of our returns on future value appreciation. When value appreciation is the only driver of your profits, you will be subject to sudden and unpredictable shifts in market sentiment that have the potential to destroy your investments.

Action Item: Avoid the allure of bubbles and pursue fundamental value in all that you do. This will allow you to side-step the “quick buck” mentality that dominates financial media and leaves many people devastated by collapsing bubbles.