A New Mortgage Picture for 2014 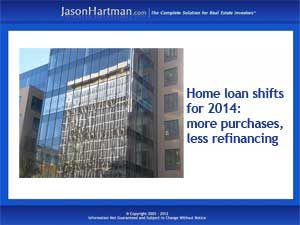 As the housing collapse recedes into memory, the housing market is finding new footing in a very different world dominated by a changed mortgage lending landscape. And, according to some economists, those changes are leading to a very different – and more optimistic – mortgage market for 2014 and beyond.

According to a new report from HousingWire, real estate industry professionals predict a rise in mortgage applications for home purchases as refinancing requests decline by half. These shifts come as housing prices continue to go up even as interest rates begin to rise.

The mortgage industry has undergone major changes in the years since the housing collapse, when lenders granted mortgages with virtually no regulation or oversight to even the most marginal of buyers. Those excesses created the climate for the crash, when many of those homeowners at risk fell into default and a wave of foreclosures swamped the housing market.

After that, as evidence mounted not just of ill-advised lending but also of outright fraud and deception on the part of the big banks, stringent lending standards aimed at protecting consumers and regulating the industry put the brakes on risky lending.

But even with tighter lending requirements and more oversight of the mortgage industry, home purchases by both residential buyers and investors are dominating the market – and the shift away from refinancing, say some economists, is a healthy sign.

That’s because, in the years after the collapse, many struggling mortgage holders turned to government and lender-sponsored refinancing programs in an attempt to hold onto their properties. Renegotiating loans with better rates in a new climate of more protections for borrowers gave these property owners a chance to avoid foreclosure.

But now, as HousingWire reports, officials at the government megalender Freddie Mac and others point to the sharp decline in refinancing an the shift toward purchasing as a healthy sign – a move toward prosperity rather than rescue. And as the Federal Reserve’s stimulus plan continues to keep interest rates relatively low, home buying is still affordable, even as prices rise.

Along with the shift from a refinancing to a buying market comes an upswing not just in buying existing homes, but also in new housing starts – and that means a boost to a variety of other industries, such as construction and manufacturing. That also means a brighter employment picture, which in turns creates confidence in borrowing and purchasing.

Crystal balls can become cloudy, and a variety of factors including a sudden decision by the Fed to taper down its stimulus and new troubles on the employment front could change the 2014 outlook considerably. But for investors following Jason Hartman’s recommendations to get started building wealth with income property, the coming year could be a good one indeed.  (Top image:Flickr/gorogen)’

Jason Hartman is the complete source for real estate investing. Read more from our archives: