A Doctor Takes On Darwinism 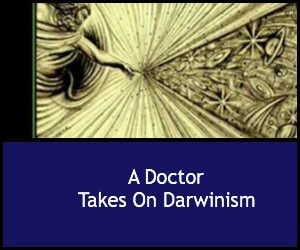 Listeners know Jason Hartman’s Creating Wealth Show is the go-to podcast for all things related to real estate, but every tenth show brings you something completely different. Case in point: a recent Flash Back Friday episode devoted to the ongoing debate about intelligent design versus Darwin’s theory of evolution.

Though listeners are reminded that Episode 540 of the Creating Wealth Show isn’t current, the issues raised by guest Dr Geoffrey Simmons certainly are. Dr. Simmons, a board certified practitioner of internal medicine, is the author of nine books, the latest two of which tackle the reasons he challenges the widely accepted tents of Charles Darwin’s groundbreaking theory on the evolution of species.

In these two books, titled What Darwin Didn’t Know and Billions of Missing Links, Simmons outlines the reasons why, after thirty years of embracing Darwinism, his work in medicine led him to question the ideas that form the foundation of most scientific thought today.

Charles Darwin published his famous book On the Origin of Species in 1859, and the term Darwinism was coined in 1860 by fellow scientist Thomas Huxley. Sine then, numerous researchers in a variety of fields such including genetics and anthropology have built on Darwin’s original ideas to create what’s now more broadly known as evolutionary theory. And it’s that theory that forms the foundation for most scientific thought today.

But as Simmons tells host Jason Hartman, that theory, and its various sub theories, simply don’t explain key mysteries about the human body, the origin of many species on the planet, and various essential adaptations that had to arise quickly.

Too Much Complexity for Chance

Take the human body, for instance. Simmons’ own specialty of internal medicine constantly reminds him of the incredible complexity of the brain and body, and the many perfectly orchestrated connections and messages exchanged through chemical signals and neurological reactions to keep basic functions running smoothly.

In childbirth, for example, there must be a chain of complex signals exchanged between mother and baby, and once delivered, within the baby’s body, to ensure that things go off smoothly and safely. For Simmons, that kind of complexity speaks to something beyond random chance over a long period of time.

The day-to-day workings of the body, from the cellular level on up, are also examples of a kind of complexity that is far from random – or slow. In fact, some adaptations have to be available immediately, for the survival of the species.

Simmons points out that giraffes are born with soft horns and gelatinous sheaths on their sharp little hooves for the mother’s safety during birth. That’s a feature that had to be present from the start – or there would be no giraffes.

What’s more, Simmons says, fossil records don’t account for the many species on the planet today – and they don’t reveal intermediate stages of development for many of them, either. That leaves, as his book’s title says, a billion missing links that should be present.

Whales are a good example of these missing links. As Simmons points out, there doesn’t seem to be evidence of evolutionary ancestors for these marine mammals. It’s almost as if they were dropped fully formed into the sea, with a brain and body rivaling the human ones in complexity.

For Simmons, these anomalies and unanswered questions point to intelligent design. But that’s a notion mainstream science finds very uncomfortable – mainly because it becomes associated with creationism, the “antievolution” stance embraced by fundamentalist Christianity. And though they’re not the same, Simmons says that the science community avoids any discussions of intelligent design for fear of losing credibility.

But Darwin really didn’t know everything. His essential work was published over 150 years ago, and he was limited by the resources available to him at the time. Simmons points out that in terms of adaptations within species and other kinds of survival based changes, Darwin’s theories work – but it’s the big picture that has some very important missing pieces.

Simmons has faced criticism for his ideas. For many people, he says, the debate over how life began and developed has only two sides: “Darwin was absolutely right” or “God did it.” But in today’s world, to believe that “God did it” involves a host of other, often unpleasant beliefs that undermine the potential validity of that statement.

But raising the question of intelligent design, according to Simmons, is a valid aspect of scientific inquiry. Up to 90 percent of the research published in professional journals is flawed, or later proved to be false.

So, because knowledge is always – pardon the pun – evolving, no theories conceived at a given point in time can have all the answers. It’s a form of what Simmons calls “contemporal chauvinism” to believe that what we now know will always hold true. As Simmons points out, Darwin didn’t know everything. And neither do we.

Even though the spotlight in this episode is on Dr. Geoffrey Simmons, there’s still time for a bit of real estate talk. To open the show, Jason takes a question from a listener who asks whether it’s better to invest in single family or multifamily properties.

CW 540: FBF – Creation vs Evolution with Dr. Geoffrey Simmons of the Discovery Institute for Science and Culture

What Makes the Memphis Market Hot?