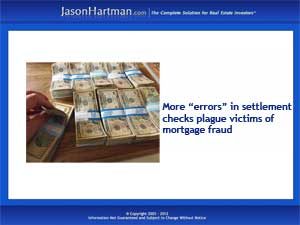 The comedy of errors continues as payouts trickle out to victims of wrongful foreclosures in the robosigning settlement case. A month after the first wave of checks began bouncing at banks around the country, another group of recipients are being told that they’ll get an extra check to compensate for a shortfall in the original payout. Still others aren’t receiving their checks because they were sent to the wrong addresses. The problem? A complex distribution arrangement controlled by Rust Consulting, the private company responsible for managing –or mismanaging – the distribution of the settlement money.

The Federal Reserve announced on May 8 2913 that around 96,000 of those victims would receive an additional check to correct “errors” leading to a shortfall in the original settlement check. That’s the second apology in a month to those who have already lost homes and waited over two years for compensation, thanks to mishandling by Rust.

After the housing collapse of 2008, leading lenders including Bank of America, JP Morgan Chase and Wells Fargo ramped up their foreclosure processing, using fake signatures on paperwork, and other tactics to push foreclosures through the system. After the abuses came to light, attorneys; general across the country filed suit against the banks and the case was settled in late 2010 for over $9 billion – but it wasn’t until early 2013 that victims began to receive their compensation cheeks.

And that’s where the problems began. The Federal Reserve named a private consulting firm, Rust Consulting, to handle the payouts, mailing out checks to victims end routing appropriate funds to regional banks. The checks were issued in waves as payouts relating to various lenders were processed.

In April 2013, some victims who received checks in the first round of payouts took them to local banks, only to be told that no funds were available to cash them. That problem was traced back to accounting practices to Rust, which failed to make the funds available to the banks. Once that problem was cleared and borrowers were told to return to their banks and negotiate the checks, the process rolled on.

Now, the majority of those whose mortgages were serviced by lending giants Morgan Stanley and Goldman Sachs and their subsidiaries are being told that they can expect a second check this May to make up the shortfall in their original checks–with assurances that both checks are fully negotiable. Complete information on the correct payout amounts is available on the Federal Reserve’s own website, but because not all victims know the full chain of providers and servcers other loans, some report problems with tracking their status.

The settlement affects around 4 million victims of foreclosure fraud. But the issues surrounding it have far reaching implications for the current climate of mortgage lending – and for both residential homebuyers and investors following Jason Hartman’s guidelines for building wealth in real estate. (Top image:Flickr/flikkesteph)