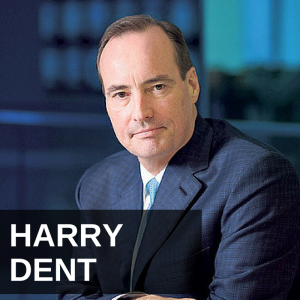 Jason Hartman interviews returning guest and founder and CEO, Harry Dent, Jr., of HS Dent, an economic think tank and research company, about the next coming crash. Mr. Dent accurately predicted the boom of the 1990s, which was contrary to what many other forecasters predicted. He explains why America is on a path to the next Great Depression through its mounting debt to boost the economy.

He talks about how the U.S. creates bubble after bubble in all areas, such as the housing bubble, the gold and silver bubble, the commodity bubble, etc. Trillions of dollars in stimulus money has poured forth from the government, along with the lowering of interest rates, thereby inciting inflation that will continue to grow with the current system of bailouts and lack of lending. He also discusses the peaks and deflation of spending with the switch between the Baby Boomer and current generations, and how this will affect America’s economic future.

Mr. Dent also paints the dark picture of China’s future, where they are overbuilding just to keep their workers employed, which will become a worldwide crisis when their building bubble bursts. Jason and Mr. Dent talk about the condition of other countries and how everything interplays to lead to the next crash that Mr. Dent forecasts. He suggests some strategies for investors and what people might expect.

Using exciting new research developed from years of hands-on business experience, Harry S. Dent, Jr. offers a refreshingly positive and understandable view of the economic future. As a bestselling author on economics, Mr. Dent is the developer of The Dent Method – an economic forecasting approach based on changes in demographic trends.

In all of his past books since 1989, Dent saw an end to the Baby Boom spending cycle around the end of this decade. In his book, The Great Depression Ahead, (Free Press, 2009), Harry Dent outlined how this next great downturn is likely to unfold in three stages, with an interim boom stage between 2012 and 2017 before the long-term slowdown finally turns into the next global boom in the early 2020s. He continued to educate audiences about his predictions for the next and possibly last great bull market, from late 2005 into early to mid 2010.

Since 1992 he has authored two consecutive best sellers, The Roaring 2000s and The Roaring 2000s Investor (Simon and Schuster). In his latest book, The Next Great Bubble Boom, he offers a comprehensive forecast for the next two decades and explains how fundamental trends suggest strong growth ahead, followed by a longer-term economic contraction. Mr. Dent also publishes the HS Dent Forecast newsletter, which offers current analysis of economic and financial market trends.