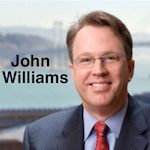 This episode of Flashback Friday was originally published: April 4, 2012

Join Jason Hartman and consulting economist, John Williams, for a discussion about how government statistics don’t paint the whole picture of economic conditions. Many years ago, John realized that GNP (now GDP) numbers were faulty, causing his clients’ sales forecasting models to no longer work.

This eventually led John into lengthy research of the history and nature of the government’s economic reporting. John explains how the numbers reported by the government hide important information; for example, true unemployment rates, which fail to include the unemployed no longer receiving unemployment benefits and those who are underemployed. Inflation statistics are misrepresented, which affects GDP.

Following changes in CPI methodology, the Consumer Price Index understates inflation significantly. John points out that cost of living increases were based on inflation data, but with the numbers so skewed, the increases are no longer representative of the actual costs. He provides a history of how these changes came about and how it has affected commerce, social security and payroll. John feels roughly seven percentage points should be added to real inflation rates in our current economy.

Despite minor changes to the system, government reporting has deteriorated sharply in the last decade or so. At the request of his old friend, the late Doug Gillespie, John wrote a series of articles on the quality of government statistics. The response to those writings (the Primer Series) was so strong that he started Shadow Government Statistics in 2004. He publishes a newsletter as part of his private economic consulting services.