1499 FBF: Understanding the Global Economic Crisis with Richard Duncan Author of ‘The Corruption of Capitalism’ 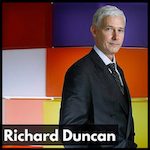 This episode of FlashBack Friday was Originally Released: November 29, 2011

Join Jason Hartman and author and chief economist at Blackhorse Asset Management in Singapore, Richard Duncan, as they discuss the global economic crisis, how it came about, where we are now, and what happens next. Richard talks about the history of the Great Depression and how we’re back in that same spot today. Richard also shares his solution to permanently end the crisis.

Richard Duncan is the author of The Dollar Crisis: Causes, Consequences, Cures, his prediction of the current global economic disaster, and his new book, The Corruption of Capitalism, a strategy to rebalance the global economy and restore sustainable growth. Richard is an equities analyst, beginning his career in Hong Kong in 1986, and has served as global head of investment strategy at ABN AMRO Asset Management in London, worked as a financial sector specialist for the World Bank in Washington, D.C., as well as headed equity research departments for James Capel Securities and Salomon Brothers in Bangkok and worked as a consultant for the IMF in Thailand during the Asia Crisis. His current position is chief economist at Blackhorse Asset Management in Singapore.

Richard graduated from Vanderbilt University in literature and economics, and Babson College in international finance. He spent a year between the two universities backpacking around the world.

Richard Duncan has appeared on many major media outlets, including CNBC, CNN, BBC, Bloomberg Television, and BBC World Service Radio. He has published articles in The Financial Times, The Far East Economic Review, FinanceAsia and CFO Asia. He is a well-known speaker, having appeared before The World Economic Forum’s East Asia Economic Summit in Singapore, The EuroFinance Conference in Copenhagen, The Chief Financial Officers’ Roundtable in Shanghai, and The World Knowledge Forum in Seoul.