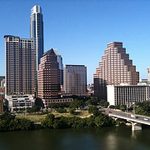 Austin experienced a moderate value contraction after the financial collapse, but is now regressing back toward its long-term trend of modest single digit appreciation. The economic fundamentals of Austin continue to be strong as it moves into 2011. Currently, approximately 37% of listings in Austin are from foreclosures.

With many companies seeking to move out of hostile business environments and into areas that are more friendly to commerce. With a highly educated population, a strong technology industry, and a low rate of taxation Austin is a nexus for business and commerce in the upcoming decade. Market values in Austin are somewhat higher than cities such as Dallas and Houston, which has resulted in lower rates of cash flow than is frequently experienced in those markets. In contrast, Austin centers much more around the University of Texas, with its associated restaurants and culture scene. Income property in Austin operates much closer to breakeven than other markets in Texas, but values have historically grown at a faster rate, resulting in a higher expected return from leveraged appreciation. 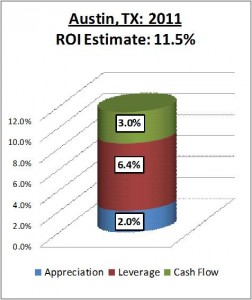 Investors are expected to realize attractive rates of return from Austin by generating leveraged appreciation and positive cash flow from rental revenue. As a historically linear market, Austin has not experienced the same value swings as many other areas, but is expected to produce consistent returns for investors. Austin strikes a balance between cash flow and expected appreciation by generating rent revenues that are frequently sufficient to pay for normal expenses associated with operating income properties. This gives investors considerable leeway in waiting for future appreciation, since they are not required to absorb significant negative cash flows. On balance, Austin represents the kind of market that many investors tend to prefer because of its attractiveness as a place to work and live, along with its balance ROI profile.

The Masters of Income Property Investing educational event starts tomorrow! If you want to go, we’ll do our best to squeeze you in.